A Year Without a Television

It has been 53 weeks since we gave away our television. My daughters cried more about giving up that TV than they did about leaving their school and most of their friends.

Initially, it was not a deliberate decision. We were moving. The unit was mounted in the family room. The folks purchasing the house inquired as to whether we would leave it. Since we were driving our own U-Haul cross-country, we figured it more than likely that that we would pack the truck poorly and shatter the TV on some icy curve in the Rockies. So we left it.

When we arrived in our new town, we rented a small cottage where we would live while we looked for our real house that we intended to purchase. It seemed silly to buy a television for that tiny living room when our future room would likely require a different-sized unit.

During which, we learned a few things:

But kids are pretty awesome and capable, and I think sometimes television can get in the way of that. It makes them receivers rather than creators. In the year away from TV, Lizzie became an Artist. She taught herself to draw horses, and sea creatures, and Rapunzel-esque princesses with hair tumbling out of castles and carriages. She became an Author, an Archer, and a Friend. Katie became a Scientist. She soldered a radio, studied circuitry, and mixed batches of pink slime in the kitchen sink. She became a Musician, a Swimmer, a Reader, and a Mathematician. Henry became independent. He learned to entertain himself with puzzles and trucks and cars. He became a Gardener, a Conversationalist, and a Chef. Maybe all of these things would have happened in the presence of the Disney Channel anyway. But I’m not so sure.

All I know is that ever since we plugged in the new TV last week, my children have been happy little zombies. They have eaten, slept, and laughed in front of the television. And drawn almost nothing at all.

In our family, cake and ice cream are Sometimes Foods, treats that we indulge in every once in awhile. I think Uncle TV needs to be a Sometimes Friend, popping in for a weekend movie night, or maybe a couple sitcoms when someone is sick. For now, however, he is an unwelcome houseguest. I’m not entirely certain we should let him stay. 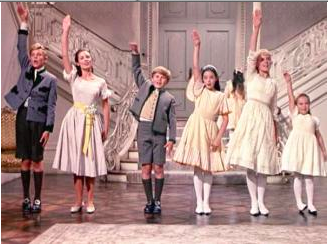 The Sound of Their Music 2