I did not march today.

I thought about it. It seemed important.

I have been angry since November 8th. Just so angry. And tired. So tired of being so angry. I was worried that today would be just another day of anger. Dies Irae.

And, of course, like many who stayed away, I had reasons.

My youngest daughter had a birthday party to attend. Her first since we’ve moved here. It meant so much to her to feel included.

My oldest had a basketball game. It’s tournament season, and they were already down two players. She really wanted to play her part, and ended up scoring the only points for her team.

My son wanted to play soccer in the yard. And Frisbee. And Badminton. And Star Wars.

My husband was traveling for work.

Getting to a march seemed too much of a hassle, a disruption. Especially to go somewhere to be angry.

But the pictures I saw today were beautiful. So many people I love. And so many strangers. Emboldened. Hopeful. Strong.

But what were they fighting for? some dared to ask. Inclusion, equality, love. All the biggies. Ideas that have felt trampled in recent months.

Even though I did not join, I felt drawn in. I played my part at home. And I behaved differently today because of what was happening.

I have been a little wary of my neighbors since moving to this new town. Today, however, I went out and met some of them. We stood in the cul-de-sac in solidarity and civility, parents of different political persuasions and creeds, chuckling and conversing and watching our children ride bikes until sunset.

I called an old friend, someone I’ve been meaning to reach out to, but it always seemed to be the wrong time. Today, I decided, was the right time.

I had a nagging feeling. Would history judge me? Would I judge me? For cowardice? For silence? For being complacent on a day that demanded action?

But I chose love today. In my way. Quiet devotion to friends and family. Others chose differently. I respect that. More than respect it, I honor and admire it. And I dare to believe that many of you marched today with women like me in your hearts.

Thank you for reminding me of all the ways love can win. 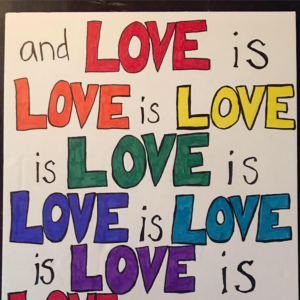 *** Thank you Kirstin and Leigh Ann for the signs, and, of course, Lin-Manuel Miranda, for the sentiment. For anyone unfamiliar with his sonnet speech at the Tony Awards, watch here or read here.