We gave away Lizzie’s Barbie house.  It was one of dozens of toys that did not make the move.  She has been missing it lately.

So Katie helped her build a new one today.  They called it Barbie Mall.

“We sell horses and dresses,” Lizzie told me.

Ken thought it looked lame, but I think it’s lovely. 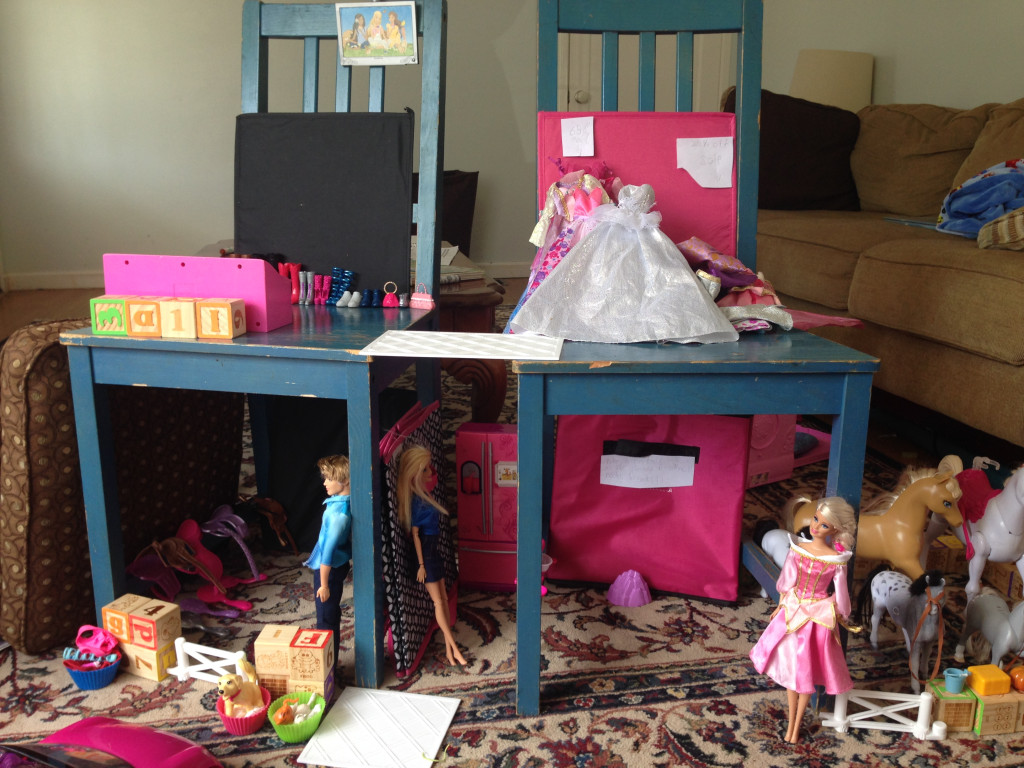 There is toothpaste on the floor.  Again.  There are Barbies sunbathing on the dining room table and horses lined up on the window sill in full promenade.  There is a laundry basket in nearly every room of the house. Some clean clothes, some dirty, some folded, most not.

I know it is virtually inexcusable.  I am a stay-at-home mom.  Cleaning house is certainly in my job description.  But I only seem capable of squalor.  I think part of the problem is that the mess doesn’t bother me enough.

I love that Lizzie built a ‘hotel’ in the living room, removing every cushion from the couch and every pillow from our beds.  I love that Katie sewed her sister a dress out of three old shirts, even if all the fabric remnants are still on the floor.  I love that Henry plays with puzzles now, even though he has chosen to unsolve all of them on the entryway rug.

It’s not total dishevelment.  We have a few boundaries.  Their rooms need to be picked up before computer time.  Their clothes should be put away before church.  We don’t have bedbugs (anymore) or head lice (yet).  Most of the mice are living outside again.  And we sent our chickens to live with friends.  But I’m still not sure I’ve ever visited anyone whose house is as chaotic as ours.

Is it wrong that I find godliness in our lack of cleanliness?  Probably.  I should at least go wipe up that toothpaste. 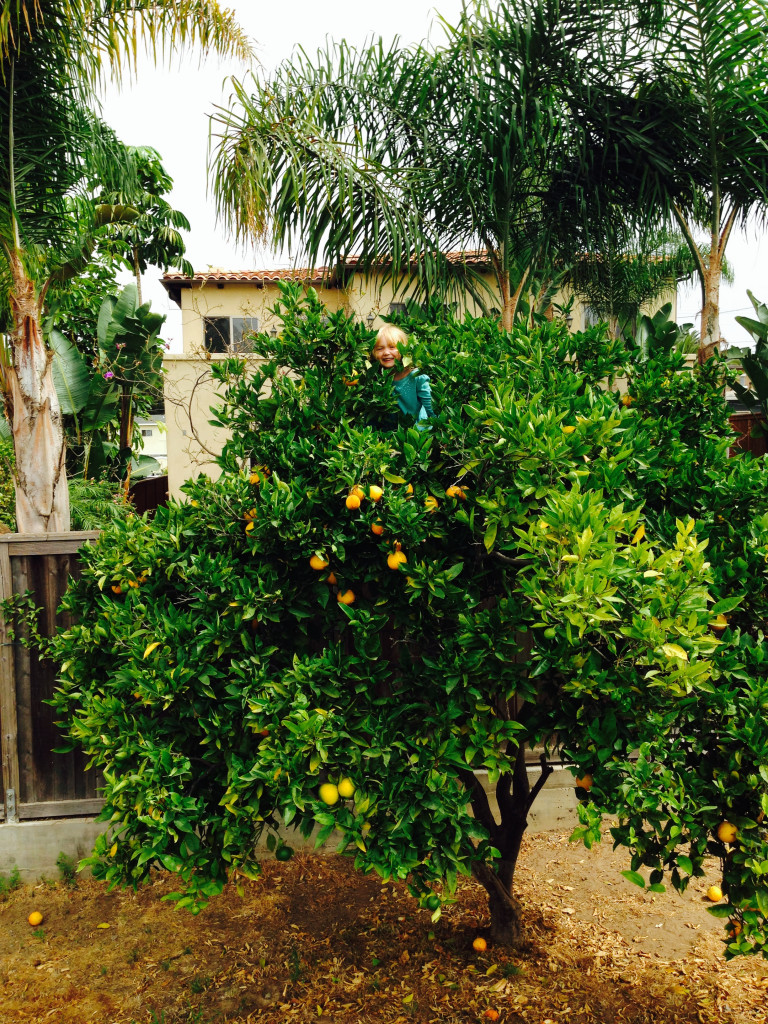 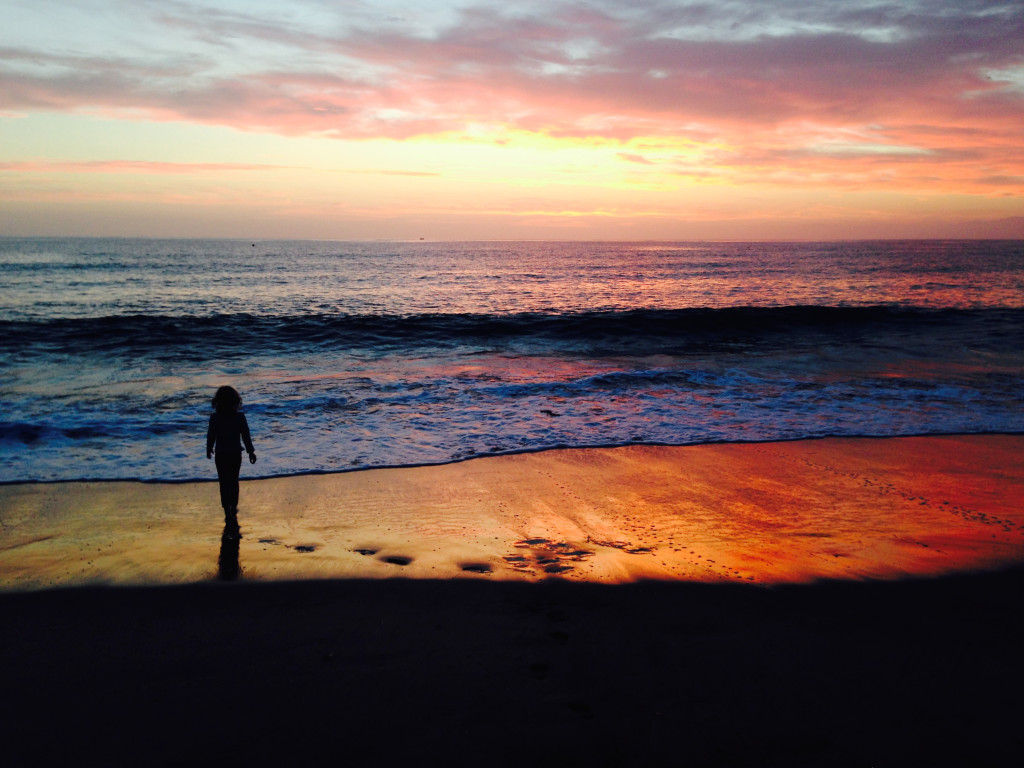 We argued over dinner.  We cried at the playground.  We had trouble sharing ice cream.

Not my proudest parenting moment, but there’s a new story on Huff Po.  Check it out. 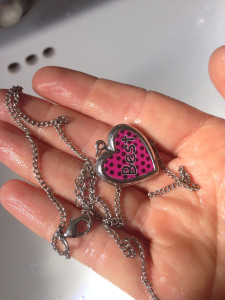 That she dropped it, I understand.  I am clumsy myself sometimes.

That she continued to use the toilet to its full potential and only then requested locket extraction….

That is where I run out of words. 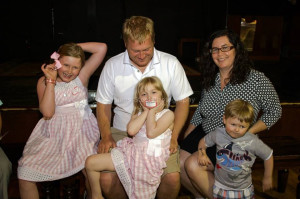 Yup, we all knew there was a camera, but this was the best we could do.

I plunked the girls in Vacation Bible School this week. It was less about the intensive summer churching – though that was nice — and more about them socializing with people below the age of, say forty. Also, it was free.

Still, it was not an easy sell, especially to my late-sleeping Henry-bucket and Lizzie-mouse. We were so slip-shod and discombobulated getting to VBS by nine the first morning, Lizzie went unbreakfasted, and Henry arrived shoe- and sockless wearing only a missnapped onesie.

“I hungry, Mom,” he said, as we waved good-bye to his sisters in the lime-green t-shirt fray. It occurred to me that Henry hadn’t eaten breakfast either. I mentally rifled through our fridge, deemed it too early for cheese quesadillas, kale, and expired yogurt, and my boy and I headed to town.

Perhaps we have dined alone together, Henry and me, in these fifty-one months that we’ve been comrades, but I can’t remember the occasion. As a rule, I don’t enjoy eating out with my children. Restaurant food is expensive and slow, and we are cheap and impatient. By the time the five-dollar hot dog arrives (I could make a dozen at home for that price), the kids might not even eat it. They will have already chewed on the centerpiece and opened every last coffee creamer, butter, or jelly tub they could get their hands on.

And then there’s the toilet.

At home, my children are part dromedaries, often going hours, if not the better portion of days without urinating. It’s a gift, I know. But there are two places where the bathroom beckons incessantly: restaurants and church. The last time the whole family went out to lunch, I ordered a single cup of soup. I enjoyed perhaps three spoonfuls before being summoned to the powder room with the girls. We were indisposed for ten or fifteen minutes, and when we returned to the table, the cup was laying sideways in its saucer, with Henry-shaped, split-pea handprints strewn across the paper table cloth.

So I didn’t have particularly high expectations about dining with Henry Monday morning.

We biked to an outdoor café near the beach. The place was full of grown-ups: women with yoga mats; breezy gents in khaki trousers and button downs. Apparently, nobody wanted to eat with children. Or maybe they’d all dumped theirs at VBS, too. As we waited for pancakes, I chatted with Henry and listened to the conversations around us.

“…yes, but when I develop a relationship with the client, this sort of $%^&# screw-up doesn’t happen.”

“I’m telling you, she had them done, and I would swear you’d never know. They look just like–

“Yes, Henry, those are trucks.”

“I don’t care whose fault it is. Just fix it. If people would read their damn email–

“You know who I’m talking about…”

“Apparently, he didn’t know. She never told him.”

“What?! Has anyone talked to her since she left with the—

“Definitely, bud. We will hop on that bus one of these days just to see where it goes.”

The business crowd left to solve an office kurfufle, and the gabbing yogis sauntered off with green smoothies.

VBS didn’t let out until noon, so Henry and I stayed. We talked about ice cubes and green cars, and he learned to dunk his bacon in maple syrup, leaving a splatter pattern of amber drops on the plastic table and all the way up his onesie to his chin.

I am bored a lot as a stay-at-home mom. These summer days in a new town are a particular kind of agony. We have no BFFs, no team practices, no piano lessons. Every morning I am face-to-face with fourteen hours to fill. I sometimes wish I had more money and fewer scruples, so I could park the kids in summer camp after summer camp, and spend my days eating ice cream and trolling the Internet.

But that morning with Henry, surrounded by my potential peers, I would not have traded places. As adults, all of the paths we take have opportunities, all have challenges. Sitting in the breezy sunshine with my little boy, there was no place else I wanted to be except crunching on ice cubes and planning a bus ride to nowhere in particular, to anywhere at all.

Lizzie’s latest phrase:  “Did you forget that?”

“You promised me a frog, Daddy.  Did you forget that?”

“Chocolate candy bars are healthy, Daddy.  Did you forget that?”

“Movie night is EVERY night, Daddy.  Did you forget that?”

Funny thing is, I give in (almost) every time.