I took Henry on his first school field trip today.  There were some difficulties.

We were instructed to meet at a nearby pumpkin patch.  I grew up in the suburbs, but if I drove ten minutes in any direction I inevitably landed on someone’s farm.  I was never far from crops, creeks, and animals.  However, my own children, raised in Los Angeles, are thoroughly removed from anything resembling bucolic rusticity.  I suppose that is why most schools here make such an effort to occasionally transport the children to where the wild things are.

Except there must have been some funding shortages this year, since our “pumpkin patch” was across the street from the shopping mall, cattycorner from a Mobil station, and not far from Benihana.

I should have turned around when I saw the long line at the admission gate.  It was like something out of Dante.  This was no verdant field in which to wander freely with a cup of cider.  This was someone’s cash cow.  I could practically hear the CHA-CHING, CHA-CHING every time another family entered the patch.

And let’s be clear:  this was no more a patch of pumpkins than I am an exotic dancer.  This was a patch of parking lot made to loosely resemble agriculture with a couple of corn stalks and some scattered straw.  And its relationship to pumpkins was tenuous at best.  Most of the round, orange fellows were piled in boxes and crates near the port-a-potty.  Those that were on display were more like museum artifacts than future jack-o-lanterns.  Signs throughout the sham patch cautioned us not to stand on, lean against, or even look at the pumpkins too enthusiastically.  And call me crazy, but I maintain that anything my family is going to cut up, light on fire, and throw in our trashcan should cost less than, say, dinner for four.

Speaking of refuse, one of the huskier workers spent most of our visit digging through the waste receptacles — perhaps to retrieve the plastic animal feed cups that the less earth-conscious patrons had thrown away, or maybe in search of a sandwich.  I could not be certain.  The whole place was a shady business.

But my son was delighted by all of it.

His school-issued t-shirt was several sizes too big, but he was able to chew on it more effectively.  Plus, it was blue, which is currently one of his five favorite colors.

He did not mind that the line for the pony ride was forty-seven minutes long.  The wait afforded him extra time to kick straw into piles.

Other than initially mistaking them for bears, Henry was enchanted by the penned up goats.  It did not bother him that they seemed overfed or that the light brown one in the center was sleeping in his own feces. 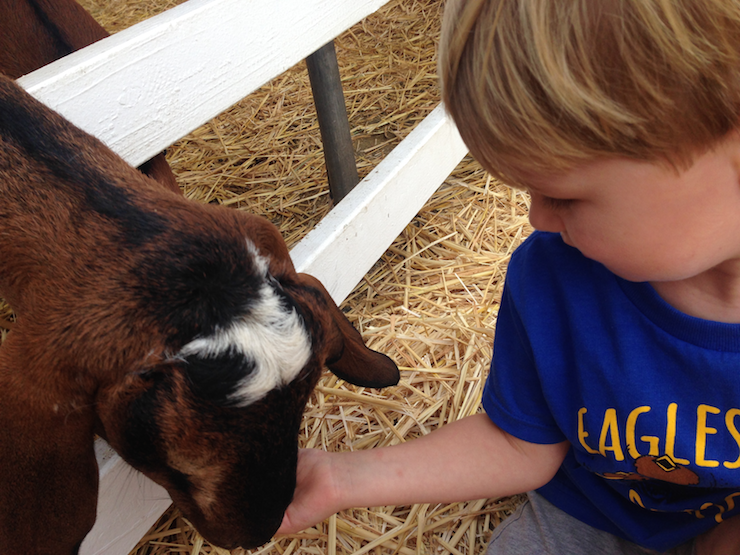 Henry also appreciated the addition of the souvenir station and bounce houses.  He did not feel it compromised the integrity of the ranch atmosphere one bit.

He loved the cardboard boxes of miniscule pumpkins, because he could hold two or three in his hands at once.

And Henry thought 24 bucks was a totally reasonable amount to spend on this faux farm experience.  And that it was also totally fine that the pumpkins cost extra.

I hate contrived joy for children.  I dislike scripted holiday entertainment, and the way kids now look to us, their parents, for food, drink, shelter, love, and concierge services.  Since when did the scheduling of perpetual fun become a mother’s job?  My own mom drew the line at dropping us off at the city pool.  Go play! was her battle cry, and it was a good one.  I crave authentic childhood experiences for my kiddos – hide-and-go-seek in the neighborhood, dips in the paddling pool, hikes off trail.

But equally important, I think, is listening to what my kids want.  For them to know I hear what they are saying, understand what they are feeling, and that I value it.  Even if their world view does not align utterly with my own.  Which means, every once in a while, I must look at the parking lot pumpkin patch through the eyes of my son, stare down its flimflam and bamboozlery, and declare it beautiful. 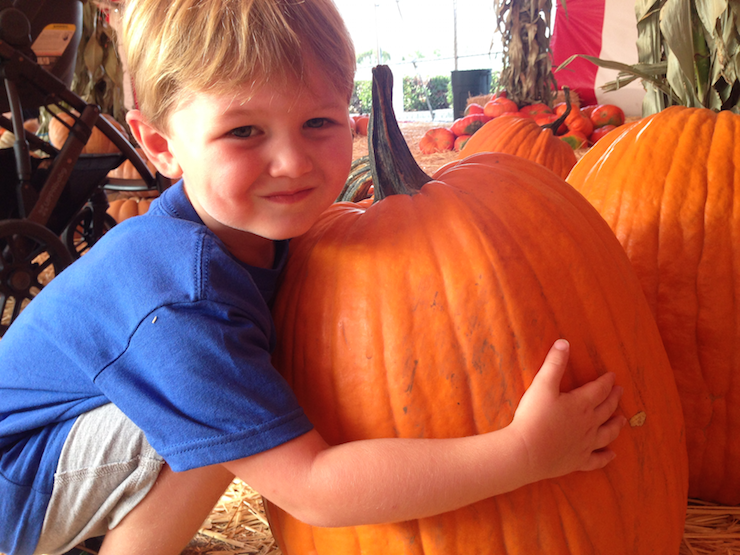