Kiddos are hard work. It is okay to say that out loud. Like the night when they had the flu AND I had the flu. Hard work. Also disgusting.

Kids are great fun, too. Like the night we turned up “What Does the Fox Say?” and jumped around the living room doing barnyard dances. Even the dog laughed.

But most of the time, moments with children are simultaneously aggravating and funny. It’s all how you look at it. Whether the fart jokes are disgusting or hilarious becomes an exercise in perspective. Like Henry refusing to wear pants this morning. It irritated me because we were supposed to pick Katie up from a sleepover. Instead, my 2-year-old circled the house half-naked yelling, “No Pants! No Pants!” Aggravating? Sure. But funny, too. Just like Katie’s singing at the dinner table yesterday. For whatever reason, for the better part of thirty minutes, she turned all words into song lyrics. Instead of asking me to, “Pass the salt,” it was, “Paaaasss theeee ssssaaaaaalt.” Annoying? Yup. But also funny. Outside of a movie musical or maybe an asylum, who does such things? Only children.

Which leads me to today. Little Lizzie. God bless her. The kid loves pumpkin pie. Not jelly beans. Not cupcakes. Pie. And since we are cooking Thursday’s feast, I thought we should test a recipe or two this weekend. We practiced gravy with the roast chicken, and baked a pie for dessert. The whole house smelled like cinnamon and garlic and butter and love.

It was all Lizzie could do to nibble on her chicken and vegetables, desperately waiting for that pie. While the rest of us were cleaning up dinner, she snuck off and cut herself a slice. The largest slice of pie I have ever seen. It was as big as her head.

When I walked into the dining room, she just sat there looking at me. It was written all over her face. What is Mom going to say? Of course, I was annoyed. While I was scraping plates and loading the dishwasher, she was sneaking dessert. Plus, what kind of child thinks it is okay to just cut into a whole pie? Who does that? I felt a lecture coming on.

But instead, I just looked at her sitting there. She hadn’t even taken a bite yet. She knew it was too big. She knew she should have waited. But the damage was done. And really, what damage? No one was bleeding. It was a pie. And a practice pie at that.

I said, “Lizzie, how come you have your dessert already?”

And she said, “It was an accident.”

So I laughed. I could have grumbled, but I laughed. Because how can you ‘accidentally’ cut pie? She awaited my wrath. And instead, we giggled and ate our dessert. Even though it was annoying, it was also funny. And kind of awesome.

My 5-year-old boldly cut into an entire pie — something I NEVER would have done when I was five. She is brave and fierce and fiery and she makes me crazy sometimes, but man, she also makes me laugh. They all do.  When I see it.  When I let them. 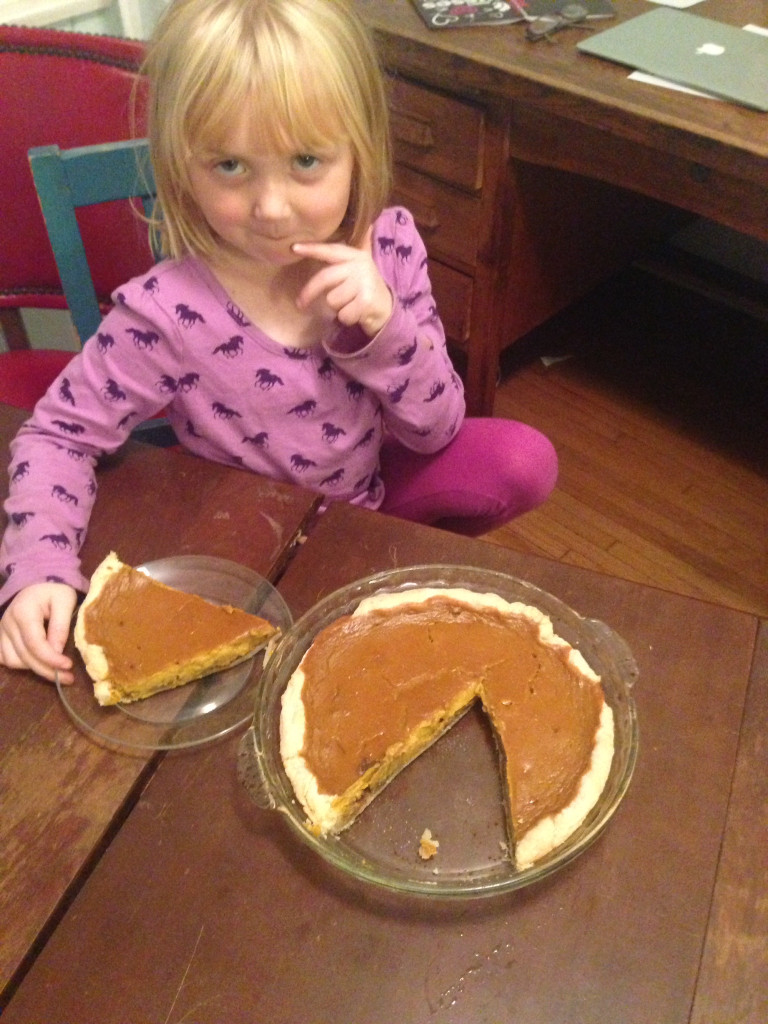