Today began with a detour. Ken wanted to see a cave.

Yesterday, it was a meteor crater. Tomorrow, probably some rocks. I tolerate my husband’s little sideshows because they:

Because unlike their father, our children seem only to want to see two things on this trip—Cheetos and Minecraft (ßwhich, for anyone fortunate enough not to know, is a game that will consume your child’s soul from about the age of 7 until, I dunno, maybe forever).

Thus, we plotted a course for Carlsbad Caverns, which sits—my apologies to the locals—deep in the corner pocket of nowhere.

Just after Albuquerque, we got separated. Ken, child-free in the big truck, was able to travel at roughly the speed of sound, whilst I, driving the minivan/clown car pulled off 14 different times for coffee, ice cream, hot dogs, apple juice, and then so various individuals could poop and/or pee. (Yeah, okay. I see now how those stops were probably related.)

Of course we were late.

Ken phoned every 10 minutes to check on our progress.  We skidded in shoeless and needing to pee (again!?) at 4:51 just in time for the final elevator of the day.

I learned no facts about the Carlsbad Caverns. How deep they were? Who found them? Why they were there? I intend to Wikipedia this info shortly.

But they were spectacular. Hundreds of feet underground, we emerged from the elevators, and turned to see enormous white caverns. Miles bigger than anything I had imagined. And rather than dark and dank, much of it was gently lit to reveal glowing structures. Vaulted cathedral ceilings dripping with piercing stalactites. Naves of calcified crystals and stalagmites. Glassy water ponds, and quiet stone seats for rest and reflection. Strategically placed lights gave the whole place a reverent glow. We spent over an hour wandering the caves, peering into seemingly bottomless pits, finding shapes in the stones. Katie saw the seven dwarves, Santa, and a Christmas tree. Henry found jellyfish and spaghetti, and Lizzie found a small theater populated by the tentacles of a giant squid. Rather than another one of our forced family marches, it felt like a religious pilgrimage. Everywhere I looked, I saw relics – statues of saints, a prayer nave, a series of benches that seemed ready for church. The cavern was even laid out in the shape of a cross.

It is a good thing that while I was down there, I did not know about the bats.

Nearly half a million bats sleep by day in a chamber deep within the Carlsbad Caverns. And most evenings, they emerge all at once to feed.

Of course, Ken needed to see this.

My husband does not know the meaning of enough is enough. 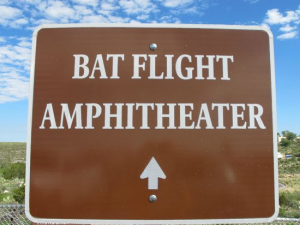 At 7pm, more than satisfied by our journey through the caverns, and on the cusp of hangry, I allowed myself to be ushered by Ken down to a stone amphitheater to meet Ranger Lacey.

At 7:45, she mentioned that if they were coming, they usually would have emerged by now.

At 8, she said that occasionally, due to weather or circumstances beyond our understanding, the bats did not come out at all, and the park had to close, and yeah, that was a bummer, but you could always come back to the middle of nowhere New Mexico another time.

The kids were getting restless. Folks began to leave. Even Ken was ready to call it.

I expected to hear the swooshing and whooshing, screeching and maybe the scraping of claws (confession: most of what I know about bats is from cartoons). Instead, 400,000 animals formed tornado after bat tornado, dipped and circled soundlessly, before lifting to the sky in flight. I sat with hundreds of people in utter stillness. 500+ folks silent as a church. Cell phones strictly forbidden. Watches set not to beep. So we just sat there, strangers in the twilight, mystified and united by bats. 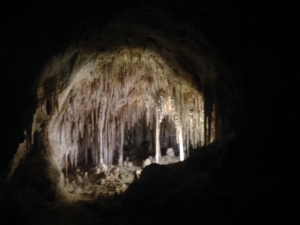 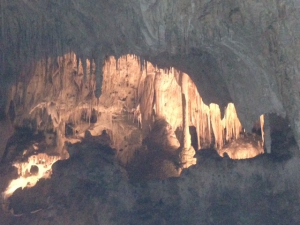 Despite my hope to capture reverence and beauty, all of my photos of the caverns look like the mouths of aliens.  You can see way better images here.

Also, even though WE could not photograph the event, others have.  Do a quick Google search of “photos of bat flight Carlsbad Caverns” to see what I’m talking about.  Pretty rad. 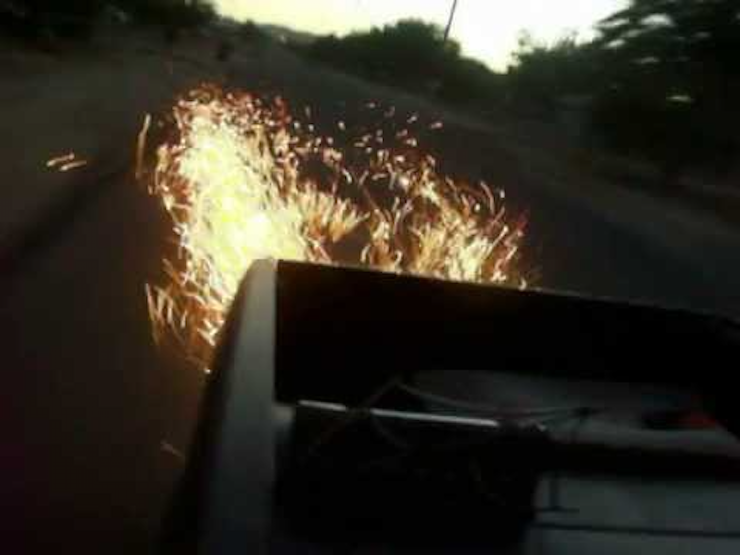 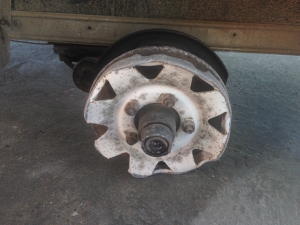