From the DadvMom.com Archives.  Happy Halloween, everyone.

As I sit here rifling through my kids’ pumpkin buckets, sneaking a Snickers here and a couple Kit Kats there, I am pleased that Halloween is officially in the books. However, as with any holiday celebrated in the company of hyperactive children, there were some takeaways:

2. There is a candy hierarchy. Like it or not, neighbors judge you based on what you hand out. Want to blend in? Tootsie Rolls are fine. M&M’s or any product in the Hershey’s genre will get you there. But Smarties? Smarties were a crap candy in 1974 and they are a crap candy today. Dum Dums are not much better. If the candy is available for free at a local bank, it is best not to distribute it. But to the fellow on Sycamore Street who handed out the whole Twix bars: you are a Golden God.

3. Scented candles, particularly lavender or pine, may soothe guests in a massage parlor or spa, but they are disconcerting choices inside of jack-o-lanterns. For reasons unknown to science, they pretty much smell like pee.

4. The teeniest, dumbest kids get the most candy. Deal with it. My two-year-old son yelled “Trick or Treat” at shrubbery, birdfeeders, and several mailboxes. But when he reached the front porch of every house, he went silent. He did not say “Please.” He did not say “Thank you.” But because he is only three feet tall, folks gave him handfuls of goodies again and again and again.

5. To the kiddos: 364 days of the year, when a strange man invites you into the haunted voodoo tent in his garage, say NO. In fact, call the police. On Halloween, go on in. It turns out the shrunken heads are actually licorice flavored.

6. To the parents: 364 days of the year, when your kids ask if they can eat more candy, say NO. But on Halloween, say YES. Actually say the words: “Eat more candy.” The shock alone will probably cause the kids to eat less than they would have had you argued about it. Plus, for about forty-five minutes anyway, they will think you are awesome.

7. And finally, when the sugar crash hits, whether the kid falls to the sidewalk in a full-on tantrum, or merely falls asleep with his face in a pile of Milk Duds, it’s all right. The kids are not evil; the parents are not ineffectual. It’s Halloween. Despite how scary things may look, no real harm has been done. It is just time to call it a night. 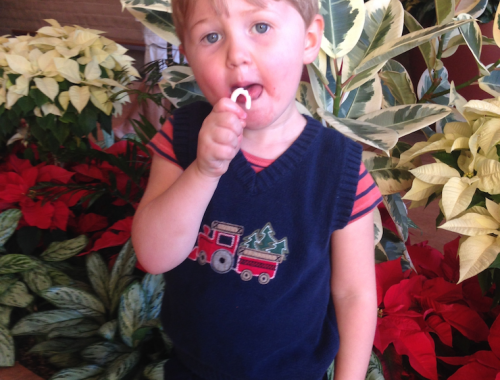