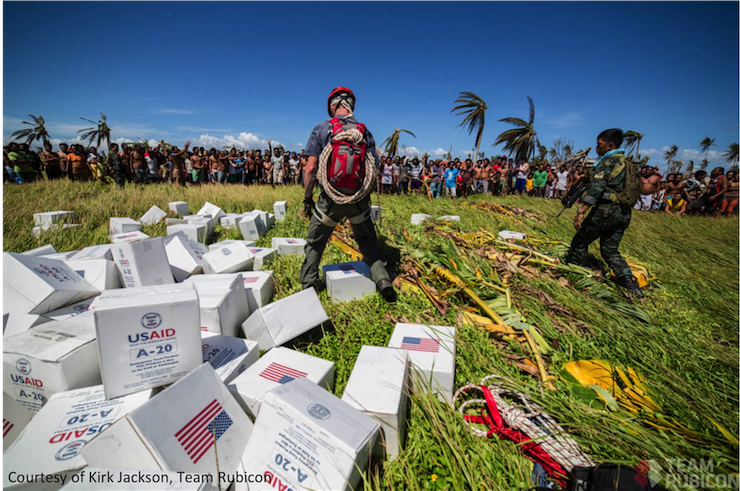 Adapted from Our New Book, Here Be Dragons

I never really liked babies. I love my own, of course. But that’s a genetic imperative. Other people’s babies? For most of my adult life, my feelings ranged from mild disinterest to barely concealed annoyance. I never found their outfits particularly cute or their peek-a-boo games terribly entertaining. And travelling with them on airplanes? I always said I would rather be stuck in the back-row-middle seat next to the toilet, than be sitting anywhere near someone else’s baby in flight. Until, that is, I went to the Philippines. In November of 2013, forty minutes after sunrise, in the wake of the worst typhoon in recorded human history, I changed my mind about kids.

When Typhoon Haiyan made landfall on November 8, 2013, it brought sustained winds of 196 miles per hour, and gusts topping 250. Had it hit the United States, its outer bands would have stretched from Washington, D.C., to Los Angeles, CA. I flew into the disaster zone with a medical relief team, on one of the first Marine Corps C-130s carrying aid workers. We landed on a pitch-black runway in a city with no lights. Amidst the rubble of a military barracks, we established our forward operating base.

The next morning, at first light, we boarded a Philippine Air Force Huey and headed south. What we saw confirmed our worst fears. Nothing was left intact. Even the sturdiest buildings had their roofs ripped away. The storm surge had rushed for miles, reducing houses to matchsticks. Ships lay hundreds of yards inland, like toys dropped amid the debris. I have been in warzones. But nothing compared to the devastation I saw flying along the Philippine coastline.

We circled the village of Tanauan and identified what we assumed was the clinic. Between the scattered rubble and crowds of people, there was no way to land. So we diverted to a strip of empty beach a few miles away. As we approached, people sprinted towards the descending helicopter. The pilot hovered a few feet off the ground, and we leapt. As our ride lifted away, a crowd of villagers gathered. We had been warned that they might try to take our supplies. The opposite was true. They were hungry and scared, but grateful, and they helped us make our way to the clinic.

The makeshift hospital was set up inside the former city hall, one of the only buildings left with walls still standing. Hundreds were already gathered, seeking medical help. Most had walked miles. Wounds were starting to fester, and the air stank of gangrene. I made my way to the second floor where a surgery was underway. 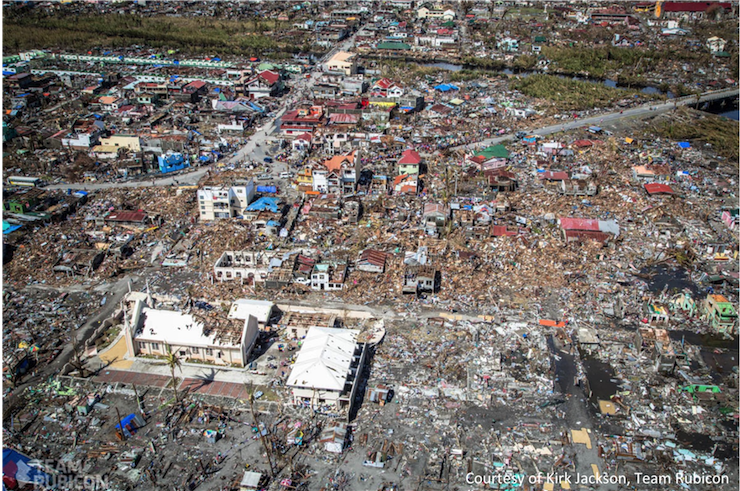 All day and all night, patients arrived in a steady stream, bearing gaping, jagged gashes, many of them showing signs of gangrene. For a rookie like me, those injuries were at least straightforward. Open, clean, disinfect, pack, and bandage. That I could handle.

The “injury” that knocked me off balance, oddly enough, had nothing to do with the typhoon. Late one evening, a pregnant woman arrived on the back of a moped. She was in labor, but struggling. The clinic was blacked out, lit only by the occasional flashlight and our headlamps bobbing up and down as we worked. Patients lay huddled in groups on the floor. Our OBGYN led the expectant mother to the “operating table,” and immediately determined a normal delivery was out of the question. Because of how the baby was positioned, a C-section would be necessary to save the lives of both mother and child.

The surgeons decided to begin the operation at dawn. When the first ray of sun split the horizon, I said a prayer. Please help this mother. Please save this baby. As the surgery began, a few of us huddled on the floor around a camp stove. Someone brewed a pot of tea, and we sat in silence, sipping from tin mugs, straining to hear the doctors talking softly to each other as they worked. Then, a sound I will never forget. A baby’s cry, healthy, strong, and defiant.

I felt the sun warming my neck, looked down into my cup, and wept. I tried to make my tears less obvious. My team in the Philippines included some of the toughest people I have ever known: combat medics, Special Forces operators, a paratrooper from the French Foreign Legion. When I looked up, I could see we all felt the same thing—our faces wore identical expressions of exhaustion and relief, but above all—joy. That baby may have been crying the loudest, but we all joined in varying degrees.

Six hours after that sunrise, we called in a Philippine Air Force helicopter to evacuate our most critical patients. A cardiac case, an amputee, a new mother, and a six-hour-old baby girl were airlifted to Manila. Miracles do happen. Even in the wake of tragedy. To this day, whenever I hear a baby cry, I smile inside.

A version of this article originally appeared on Fatherly.com.