As a child, I was a bit…theatrical.

I tap-danced at nursing homes, directed talent shows on the front porch, and composed original works for my recorder club. I memorized songs from The Sound of Music, My Fair Lady, and West Side Story, and repeatedly staged Annie in my upstairs bedroom.

But it was not until high school that I actually auditioned for anything. In my first play, Working, a musical about Americans and their jobs, I sang backup for the factory worker and the housewife. I had no lines, and no costume changes, and I spent roughly eleven minutes on stage pretending to either weave fabric or clip coupons. I spent so much time off stage that I could make a McDonald’s run during the show and still be back for curtain call.

My hopes were higher in our next play, a French comedy entitled The Miser. Indeed, I was rewarded with my first line. Well, not a line so much as a word. And I didn’t exactly deliver the line in the show. I was cast in the Troupe de Comédie, a fancy name meaning, “kids who did not make it into the actual play.” We wore funny hats and tumbled onto stage to announce important information like, “Act 1, Scene 3,” or “The Play is Over Now.” I spoke my single word, “tock,” during Intermission, when we informed the audience that they had a ten-minute break, and the clock was ticking. And tocking. We were the human equivalent of the playbill.

And so it went. I had two lines in Bye-bye Birdie, but I delivered them in darkness during a scene change. (“I found a lock of somebody’s hair. I wonder if it’s his?”) In Carnival, I played a puppet that helped talk a young girl out of suicide. It was not exactly Singin’ in the Rain.

By senior year, I got my big break with a solo in Godspell. Except my boyfriend and I broke up a week before the show, and I was so distraught that I caught a cold and lost my voice for opening night. I had to lip sync my own number while another gal sang for me. That one was actually quite a lot like Singin’ in the Rain.

As I look back on these bit parts and botched scenes, I find it amusing that I grew up fancying myself a singer, dancer, and actress. It is utter poppycock. I am no more an actress than I am a snake charmer. But the things we try as children stick, even if they don’t turn out to be true.

Which is why I am so proud of my daughter, Katie, tonight. It was the opening night of our community production of Peter Pan, in which – failing to follow in her mother’s footsteps — Katie was cast as Wendy. At 4:30, I applied her make-up. At 5:30, I dropped her at the theater. And at 6:15, I received an urgent communiqué from the stage manager: “Wendy needs you.” I found my little girl hyperventilating near the snack bar, insisting she could not play the part. Situations like this were not covered in the parenting books I read, though they most certainly will be when I write one. Chapter 1: Preventing 5-year-olds from Calling Heavyset Women Pregnant. Chapter 2: How to Remove Poop from Furniture. Chapter 3: What to Say When Your Child Threatens to Flee the Theater Fifteen Minutes before Curtain.

Poor Katie had the flu last week. She missed the tech rehearsals and costume fittings, and never had the chance to become at ease with the lighting and live music. As the audience was being seated, she became more agitated. What could I say to make her feel better? I considered, “Don’t be nervous,” but Katie was clearly petrified. “Try to calm down,” seemed likely to have the opposite of its intended effect.

I pulled her into an empty rehearsal room and wracked my brain. When in my life had I been truly scared? And what had people said to ease my fears? I was robbed once in a parking lot. It was terrifying, at first. But I turned out to be as broke as my assailant, and all the guy got was six bucks. Some crooks broke into my house a few years back, but I slept through the burglary, and only felt afraid after the fact. Truthfully, the most alarmed I have been as an adult was the night my daughter was born. For months, I worried I would not know what to do, that the pain would overwhelm me, that the baby would suffer because of my mistakes. How had I made it through that fear? I vaguely remember people encouraging me to breathe.

As a rule, children do not like to hear their birth stories. They do not want to be reminded of how you wiped their private parts, and held them to your breast, or how they were once fully a part of you. I spared Katie the intimate details. Instead, I told her the funny stuff, and reminded her to breathe. The doctor was annoyed to be working that day because the Super Bowl was on. Breathe in…2…3…4. Breathe out…2…3…4. During the contractions, Daddy said he was “getting tired,” and I yelled at him when he leaned on my bed. In…2…3…4. Out…2…3…4. Sweet baby Katie did not cry for the first week at home, and fooled us into complacency about “what a breeze” this parenting thing would be. In…2…3…4. Out…2…3…4. Then that same baby shrieked inconsolably every night for the next four months. She cried so much she threw up. We had to pull the car over and bounce-walk along the highway to try to quiet this tiny, furious angel. “You were one of the worst babies I ever met,” I told Katie tonight. “But you have grown into a spectacular kid. You were dramatic from the get-go. You can do this. It’s in your blood.”

She had stopped crying by then, but was still unconvinced that she should take the stage. “Mom, what if I’m not any good?” I thought back on my years of theater and realized that I had never been much good at any of it. I learned confidence and poise, experienced playfulness and joy. But I did not learn to act.

“Katie, you are performing this show for an audience of your family and friends,” I told her. “Even if you walk out on the stage, say ‘Meow,’ and pee, everyone is still going to love you.”

In the end, I am not entirely sure what did the trick. Maybe she just decided it would be less dramatic to stay and do the play than to deal with the fallout of leaving. But when the lights came up, Wendy took her first cue, and Peter Pan sailed on from there.

I did not take my own seat in the audience tonight. Instead, I stayed backstage while the principal actors, my daughter among them, sang and danced and flew. The feeling of watching from behind the curtain was a familiar one. Hidden in those shadows, I realized that my years of waiting in the wings had actually prepared me for this moment, for the biggest theatrical role I will ever play: the chance to be someone’s Mom. 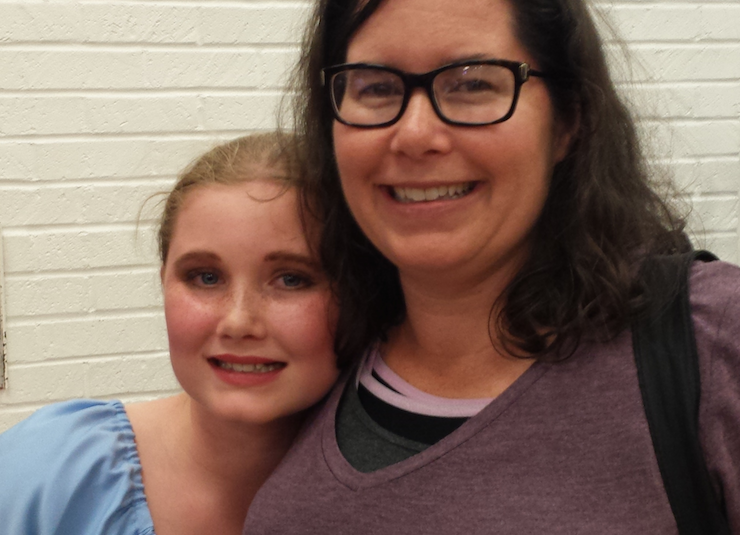