On the night before school started.

In the worst seats in the house. 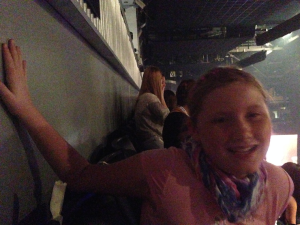 [That, my friends, is the back wall and ceiling of the Staples Center. No seats behind us. The only folks above us were working the lights.]

In – as Katie assured me – some of the least-stylish outfits ever seen.

[“Mom, couldn’t you at least have worn your hair down? And why does Lizzie have so many holes in her pants?”]

To a venue that sported even more concert-going families than The Wiggles tour back in ’08. 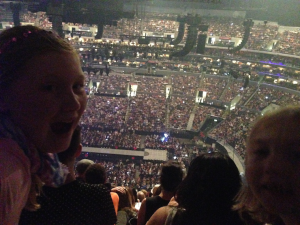 As a parent, I had my reservations. I did not love the midriff-baring costumes, the repeated mixing of love and rage*, and the strange need we have to up, up, up the sex appeal of even the most innocuous female singers – from catwalk choreography to sequined body suits. 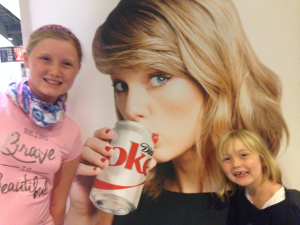 But my kids were in heaven.  I am not sure I have ever seen them dance or smile quite so much.

Between songs, Taylor talked about how writing music helped her through her teen years. She said all of us have baggage, and we sometimes get so wrapped up in worrying about what others think that we forget to value what we think about ourselves. We should see mistakes as opportunities to be born again, to do things differently the next time around.

Most of the things Taylor Swift said were not terribly original or wise. But they were coming from Taylor Swift.

And when I saw my 6- and 10-year-old nodding in agreement, I knew that — despite the thigh-high black boots, garters, and crotch-hugging white underwear shorts — Taylor was still in there, somewhere, and she still takes this idea of connecting with her fans very seriously.  She does not just want to entertain, she wants to soothe, and maybe even heal. 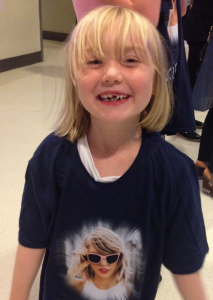 She did that for my quarrelsome kiddos.  She brought down the house on a flying catwalk singing “Shake it Off,” and we road the tidal wave of bubbly sentiment all the way home.

You won my girls’ hearts, Taylor.  I want to believe I can trust you with them.

Thanks for a good show. 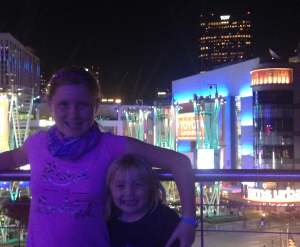 ***As a parent, I know it was fantastically inappropriate to have Alanis Morissette join Taylor Swift on stage to belt out “You Oughta Know” — the f-bomb! the theater trick!  But as a college student of the 90s, man, it was SO COOL to see one of my music idols up there jamming [in jeans and a button down shirt BTW].  Way to bring it, Alanis!

One reply on “Growing Up Swiftly”

Great pics of our bsby girls so happy and cool..ESP Katie and stylin scarf age…love it. Andyou all loving and loving life with the hi rolling hitop set dear one. Mamma Nonna hugs