Lizzie went surfing today with her preschool class. Say what you will about Angelinos, but they knock some things out of the park. Lifeguards picked up the kiddos and drove them to the beach, where they played Sharks and Minnows, donned teeny-tiny wetsuits, and then kayaked, surfed, and sailed. All morning, I was wide-eyed. It was like watching the best kind of magic show – children dazzled by one mountaintop experience after another, all before lunch. 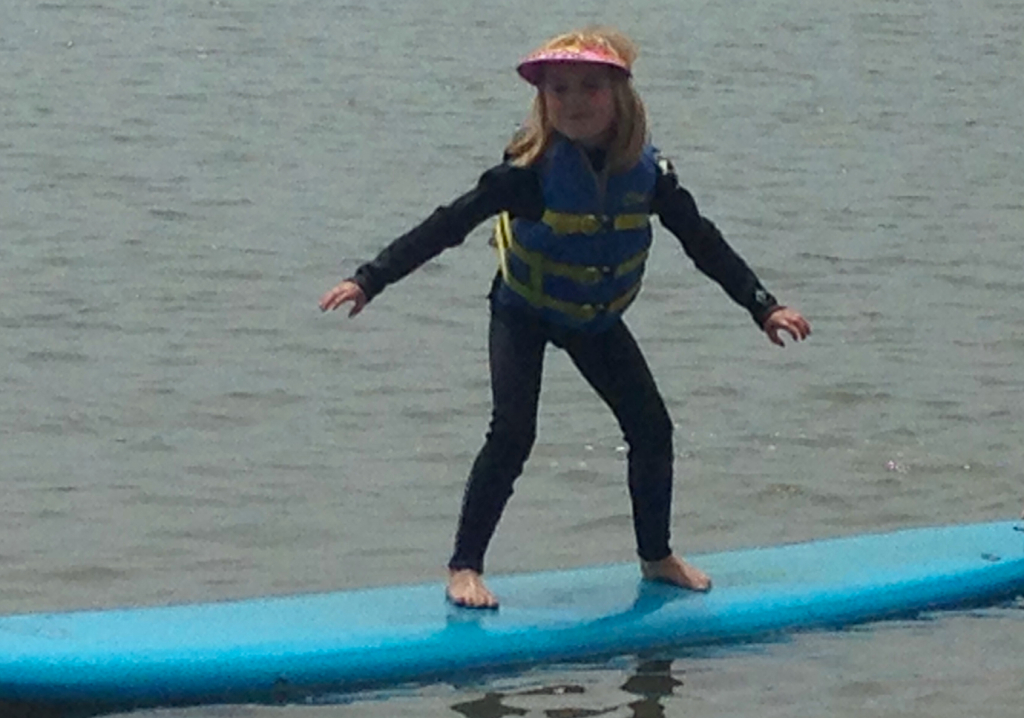 Big idea for today: it is fun to say yes. All day long I say NO. No cookies, no marshmallows, no hitting, no arguing, no jumping on the bed. But today we said, YES.  YES you can surf, and YES you can sail. And everyone was happy. I like YES days.

In 2012, I joined a gym. At first, I even went there. Sometimes to work out. Sometimes for sandwiches. But I grew tired of elliptical machines and turkey burgers, and by 2013, I faked an old track injury and finagled out of my contract.

In 2014, I started running again. I bought plush socks and shoes with impressive treads. I downloaded an app to chart my progress, and figured I’d knock out a 5K by Memorial Day. Or Labor Day. Or Thanksgiving at the latest. According to my log, the last time I jogged was June 13th, and I sustained that run for a total of ninety-three seconds.

And so it goes with resolutions. This year, I set out to lose the baby weight, and by next year, I’m pregnant again. On January 1st, I swear off dairy products, but by Valentine’s, I’m hiding chocolate around the house, and eating cheese fondue for dinner.

I had come to view yearly promises as an absolute waste of time. But something happened yesterday that turned my cynicism upside down. Literally. Because yesterday, I held my first handstand in yoga.

I know, I know . . . yoga. Every time I hear someone ruminate about the virtues of chakra and chi, I feel like running from the room. But as those who know me can attest, my pear-shaped figure and copious rear end do not flex easily into any yoga pose, especially the airborne variety. So hear me out. Yesterday, aided by guilt over the apple pie I ate for breakfast, and urged on by an instructor skilled at breaking difficult exercises into manageable steps, I stood upside down on my hands. And smiled. For a few blissful moments, I ceased to be a middle-aged mother of three. I was a child tumbling in the front yard. I daydreamed about the circus, the Olympics, the moon.

Afterwards, my teacher shared the following tidbit: “It was absolutely impossible, so it took a little longer to achieve.”

It is easy to dog on resolutions. But that is such a cop out. I have been practicing yoga on and off for fifteen years. The first fifty times I attempted a handstand, I failed. I blamed weak wrists and shoulders, and flabby post-pregnancy abs. I failed so often that I gave up trying.

But yesterday, I remembered why I had begun yoga in the first place. In my early twenties, I worked at a rehabilitative program for juvenile offenders. Gang members, drug addicts, kids who had been tossed from school. Failure was what brought them to me. And one of the first things we did was set goals. Goals for the month, the day, the week. Sometimes they were loftily worded psychobabble: Beatrice will use ‘I feel statements’ to express anger and opposition about her quality world. Sometimes they were basic: Jackie will wear clean pants every day. In the beginning, most of those mouthy, broken teenagers screwed up their goals before breakfast.

But every day, we helped them try again. And in the end, after months and sometimes years of failure, many kids ultimately triumphed. They graduated high school, got jobs, had families. I read a note recently in which a young lady named Shannon credited the program for saving her life. One of her first goals had been to brush her hair and teeth.

Maybe the trouble with New Year’s resolutions is that we assume they are to be completed within a single calendar year. Or maybe we have simply forgotten that in order to rise up, we first have to fall.

As I stand on the precipice of another new year, I am tempted to channel Janus, the ancient Roman god of transitions and passageways. He is often portrayed with two faces, one looking forward and one looking behind. I am torn between idealistic hopes of the person I might become, and backward glances at the only person I have ever been.

But this year, I am channeling Shannon instead. And I double downward dog dare you to do the same. Toss the cigarettes. Give that white bread a break. And when you flub up next week, figure out why, and try again. Make New Year’s resolutions and St. Patrick’s Day resolutions and Arbor Day resolutions. Set goals for yourself the whole damn year. It does not matter if you achieve them today, tomorrow, or ten years from Tuesday. Just don’t quit until you reach your handstand.