The greatest thing about having a child is putting yourself second in your own life.

Ken works occasionally in San Francisco, and since this is one of my favorite cities in the universe, the kids and I occasionally tag along. This past weekend, we stayed opposite the water in lovely Pacifica. But after a shabby night’s sleep in a stuffy hotel room, I decided I needed a walk. I meandered a trail beside the ocean, and it was glorious – blue-green water, salty sea air, breathtaking vistas. I breathed deeply and felt lucky. We have neither wealth nor fame nor power, but we have good love, good adventures, and good kids.

It was warmer than I anticipated so before heading up the steepest trail, I zipped back to the car for sunscreen and a hat. In the hotel parking lot, I felt selfish for keeping such a scenic sojourn all to myself. I ventured upstairs to see if anyone wanted to join in.

My three precious yahoos were sitting in the Jacuzzi tub eating mini-muffins, drinking apple cider, and watching the Disney Channel. Ken was asleep. 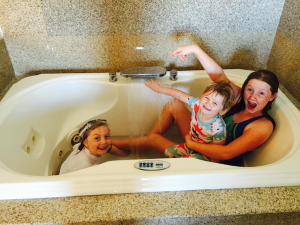 “I found an awesome trail!” I announced. “Who is up for a cool hike?”

No one acknowledged me. I stepped in front of the television and asked again.

Ken muttered that he would like to come with, but then rolled over and went back to sleep.

That should have been my cue. They were on vacation. They had muffins. And crap TV. They were happy.

Instead, I muted the program to clarify my suggestion – the blue-green water, that crisp sea air. Again, they declined. It turns out that children do not care about these things. And again, I failed to make my exit. Instead, I cajoled, complained, and insisted. Had we really driven six hours to watch television? Didn’t family walks always make us happy? Wouldn’t it be great to discover some hole-in-the-wall seafood shack for lunch?

After you live with folks for a while, you learn their particular kind of crazy. When Ken and the kids realized I was not going to drop this, they begrudgingly acquiesced.

It took nearly ninety minutes, but eventually, everyone was washed, dried, and dressed for the wonderful family outing I had declared. We set off up, up, up the hill. 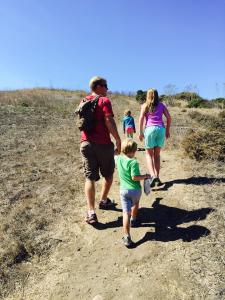 It was strange to be ascending with people so obviously downtrodden.

It was hotter than it had been when I originally set out. My formerly energetic pace was quickly slackened by grumbles, quarrels, and literal foot-dragging.

I should have left them at the hotel. What kind of idiot drags kids out of a hot tub to go hiking? If and when we ever finished this dirty ramble, they were just going to need another bath. I had desperately wanted to share this outing with them, and as soon as we began sharing the outing, I desperately wanted them to go away.

That’s the funny thing about doing anything with children. It does not matter what you do or where you go – Disney World, a restaurant, ice skating, the bathroom, the library, the airport, the mall — the very presence of the children makes doing that thing more difficult and usually less enjoyable. I often wonder why we bring our children anywhere at all.

They made me cranky and I made them cranky, and various threats were lobbed regarding the abandonment of the entire business, but we kept going anyway – me, because I refused to return to the hotel yet again without first climbing this damn hill, and them, because … well, they are kids, and kids are prone to follow trails and sidewalks until they end. Shel Silverstein taught us that. 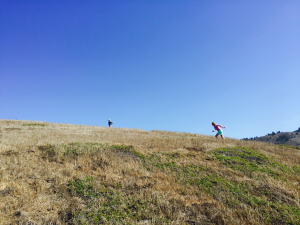 And here’s the thing: it’s actually really hard to stay angry when you are A. exercising, and B. face to face with beauty. It just is. And C. It’s hard to stay mad at your children when they have stopped being mad at you.

So, what began as a swift, splendid hike by myself turned into a slow, terrible hike with the kids. And then, for about eleven minutes, that same slog turned kind of awesome again. We caught a lizard. We reached the summit. We followed a secret trail to a hidden cove. We ate wild fennel on the beach. We even made it halfway back to the car before everyone started arguing again. 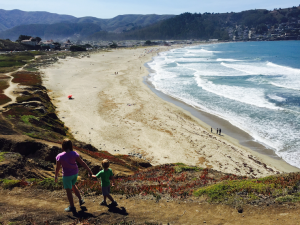 That trek was different with our children there. It was so much worse, but also a little better.

And yet another reminder that we have neither wealth nor fame nor power, but we have good love, good adventures, and good kids. Mostly.