We have not visited Santa this year. We have entered no shopping malls, paid for no photographs, and endured not one single moment of waiting in any faux wonderland.

Instead, as is the tradition in this merry little town we now call home, Santa came to us. In a little red sled, on a big brown trailer, pulled by a grey pickup truck. And flanked by a police escort.

If the setup sounds wacky, that is only because you have not seen the magic firsthand. Sirens and lights roused us to our windows, as a cruiser drove along the street announcing, “Santa is coming. Santa is coming.”

My kids grabbed hats and coats and tumbled out into the darkness. Sure enough, moments later, Santa rounded the corner–going maybe nine miles an hour–and the whole party stopped right in front of our house.

My kids got down to business one, two, three.

Lizzie presented an itemized list with “PURPL UNNECORN” printed at the top.

And Henry, the littlest one, gazed at the cars and trucks all aglow, and quietly asked if Santa would drive him to visit his grandparents in Ohio. Santa chuckled, smiled wearily, and said, “I really wish I could, buddy. Maybe Mom can help with that one.”

Henry pondered this as he hopped away with a candy cane.  I liked that Santa suggested Mom was powerful, too.

The kids presented the whole entourage with a paper plate of homemade cookies. And Katie added, “I also wish for everyone else to get their wishes tonight.”

“No one has ever asked me for that before,” Santa replied.  “I’ll see what I can do.”  Then the bedazzled Christmas train lumbered off into the darkness.

It seemed to me that Katie was confusing Santa with a genie, as though she could keep wishing for more wishes, the ultimate Christmas loophole. But Santa saw the loveliness in her request, and had honored the goodness in all three of my children, something I often fail to do.

The whole visit lasted only a few minutes, and was like a page from a storybook–one of 1001 tales you might tell late at night. About that time when you were a kid, and Santa came to your house, promised you a unicorn, gave you some candy, and drove away in a little red sled, on a big brown trailer, pulled by a grey pickup truck. 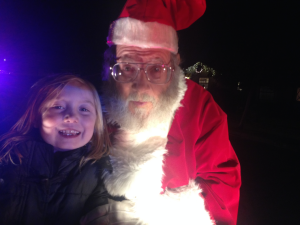 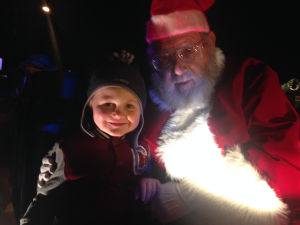 So we stood in line to see Santa yesterday.

There were some problems.

For starters, the Santa-to-child ratio. I’m no mathematician, but my estimates put the number of kids ahead of us at just under 17 million. Number of Santas ministering to those children: one. Those were crap odds.

We know that Santa is clutch. He’s up against heftier numbers on game day, and he always comes through. But that must be due to his crackerjack support network — the elves, the Mrs., the deer. Our Santa… he had staffing problems.

From what I’ve researched, elves are of paramount importance to this whole seeing Santa business. These green-clad minions move folks along. They keep the action merry. But there were no polar aide-de-camps working our line. No one in or out of tights jingled a bell or cheerfully hinted we were getting any closer to the Big Dance. There were no elves staging photographs. Terrified children stood in awe of Santa and/or picked their noses, allowing precious seconds to pass. No elves hustled anyone off of Santa’s lap or hurried families through a candy cane exit.

Seeing Santa is not work you want left to parents. If we wait all that time, when it is finally our turn, we want the perfect shot. We have Facebook pages to update, and friends to Instagram with photos of our kids in complementary reds and greens. We want Santa to hear everyone’s complete list, even little Timmy’s. He is shy, but if you just give him a minute or two, he’ll open up and tell you everything for which he is quietly hoping. The choo choo train. The blocks.

In short, parents are Santa hogs.

Which is why, after an hour-and-a-half, my kids and I were still nowhere near the jolly man in red. I tried bribery. “How about some kettle corn?” And cajoling. “Wouldn’t it be way more fun to see Santa next week at the mall?” I even tried to dash hopes. “Seeing Santa isn’t that big a deal anyway. Who wants hot chocolate?”

My 9-year-old wavered when I mentioned a beverage, but sensing my desperation, insisted on a pizza, too.

My 2-year-old had already bumped into everyone in line near us, so he was eager to break out of the queue to knee-cap new victims.

But 5-year-old Lizzie would not budge. Her eyes were full of hope. She wanted to ask Santa for a Barbie doll. “I know we’ll make it, Mom. We just have to believe.” What could I say?

So for 93 minutes we believed.

But then Santa left for a smoke break.

And there was some sort of program involving hand bells, and carolers, and a speech about a Christmas tree. I tried to watch. But we were standing in a line that was no longer moving, waiting to see a fictional character who was no longer there.

I lifted the red velvet rope and gently tugged my children out into the darkness.

There was crying on the way home. Also an argument over burritos. I tried to engage them in conversation. “If you had been able to see Santa, what would you have asked for?” 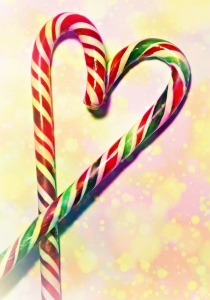 At home, after a dinner that was neither pizza nor burritos, we wrapped presents for a family whose name we’d pulled at church. A Barbie doll, a train, some matching jammies in red and green. For a little bit, anyway, we played at being their elves.

We drank cocoa and laughed when Dad tried to play “Jingle Bells” on his ukulele.

We told each other what we wanted for Christmas.

And as I snuggled with my children on the couch, once they had determined they no longer hated me, I decided that Santa Claus could kiss my ass.