It was rumored there were whales in the bay today.

My husband and I decided to paddle out and see if it was true.

We brought the children with us.

That may have been a mistake.

Like most of our excursions of late, 66% of our kids professed disdain for and disinterest in the initial plan. Lizzie said she would only come if she could bring her new sketch pad. And markers. And snacks. When we explained that we were kayaking, she called us stupid and hid in her room. When we invited Katie along, she suggested going for fish tacos instead. When we said we’d really like to stick with the whale thing and that maybe we could grab food after, she told us we were ruining her life and flopped down on the living room floor. Only 3-year-old Henry agreed to come whale watching. He grabbed his five favorite stuffed animals and hopped in the car. It was only later that we learned he thought we were going to a movie theater.

We very nearly left them all at home. Hiring a sitter would have been easier. But, dammit, we were offering them a maritime adventure and they were acting like we’d said, “take out the trash.” Despite everything I have learned lately from the awesome book I’m reading about listening to my kids, I refused to take NO for an answer. It took us nearly two hours of cajoling, bribery, anger, and arguments, but in the end, we got all three children into those boats. 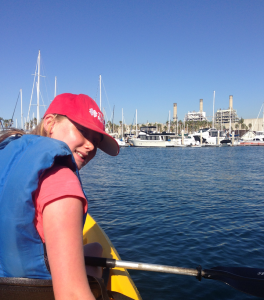 This was not actually our first oceanbound endeavor to see sea life. Several years ago, we boarded a whale-watching zodiac off the coast of Victoria, British Columbia. After what seemed like fourteen hours of searching, our captain idled the motor long enough to show us a children’s picture book of what the whales might have looked like had we seen any at all. We returned to shore without sighting so much as a pelican.

A few weeks ago, Ken took the kids on a dolphin boat that failed to find any dolphins, and a lobster dive that resulted in near hypothermia, zero crustaceans, and dinner at a Chinese restaurant. But today felt different. Today, the whales were out there. And we were going to find them.

When we rented the kayaks, the gal assured us that it was only a “quick 2- to 3-mile paddle” out to where the animals had last been sighted. The water was described as “glassy” when we called to reserve the boats, but by the time we had had all of the arguments we needed to have, about markers, movies, and tacos, and actually found ourselves and our grumpy progeny seated in the kayaks, visibility had begun to diminish and the wind was blowing steadily onshore.

Still, we shoved off. Our paddles were identical, but Katie and I argued over who got the better one, and Lizzie yelled at Dad because the sea lion colony was too smelly. But we kept going. We rounded the breakwater toward the open ocean and found ourselves looking at 15-mile-an-hour winds and 2- to 3-foot swells. For true sea kayakers, these were still pretty good conditions. But for folks like us, who ate hushpuppies for breakfast, and had several passengers as moody ballast, the conditions were quite challenging. After the eleventh wave broke into the bow of his boat, Ken suggested we turn back. Considering the conditions, our ability levels, and the family temperament, reason was on his side. The children had probably been right about this “dumb stupid trip to see dumb stupid fish.” 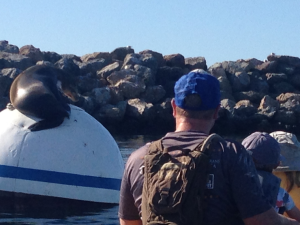 “Let’s keep going,” I said. I wasn’t ready to fold. At least we would get a workout in.

And workout we did.

We pointed our banana yellow kayaks toward a sailboat leaning along on the horizon, and paddled as though we might be able to catch up.

That’s when Ken saw a spout of vertical spray several hundred yards in the distance. None of the rest of us had seen it. He told me later about the cartoonlike gush of blowhole spray. He signaled to me and we picked up our pace.

We paddled swiftly for another hundred yards and that’s when Katie saw the tale. She shrieked and pointed, “I see it! I see it!” Ken’s boat cut in front of ours, and soon all of them were pointing and screaming about the whales.

Whenever we go visit my in-laws in the Texas hill country, we look for shooting stars. Away from the lights of the city, they are actually a pretty frequent occurrence. But I almost never see them. The crick in my neck gets to be too much. I crouch down to tie somebody’s shoe. I zip to the bathroom. Inevitably, I look away at the very moment the golden star streaks through the sky.

I felt the same way today. There were shrieks of delight from Ken’s boat as he and the little ones got closer and closer to the feeding grounds. Katie exclaimed repeatedly from the front of our boat, “Mom, did you see that?” “Did you see that?” Each time, of course, my answer was “No.” I am the only one in our family who wears glasses. I struggle to see things that are far away. My dollar store sunglasses merely compound this nearsightedness. Thus, I did not see the whale breach. I did not see it slap its tale or poke its nose above the surface. I did not see the water blowing vertically twenty feet into the air. Ken yelled that the whales were swimming away from us. I squinted my eyes against the sun glare, scanned the empty horizon, and kept paddling us out to sea.

I consoled myself. Wasn’t it more important, the most important thing, actually, for me to get my children out there? Wasn’t that a mom’s job? To be a vehicle of strength and opportunity, to chauffeur kids right up to wonderful moments, even if that meant never actually seeing the wonders myself? Even though my kids had been jerkasauruses, I knew they were going to remember this day for the rest of their lives. The day their mom and dad paddled them into the open ocean to see whales feeding. I would not ruin the memory by pouting about how I had not actually seen anything.

And then a tale stood straight up in the water in front of me. It was still fifty yards in front of our boat. But finally close enough for me to see. And hear. The low thump of an enormous animal stunning its prey. It was remarkable. Nothing like the picture of the whale in the children’s book. Majestic. Awe-inspiring. And a teensy bit scary. For nearly ten minutes, we watched these animals – there were three of them – thrashing, diving, and feeding. And then they disappeared as quickly as they had come. 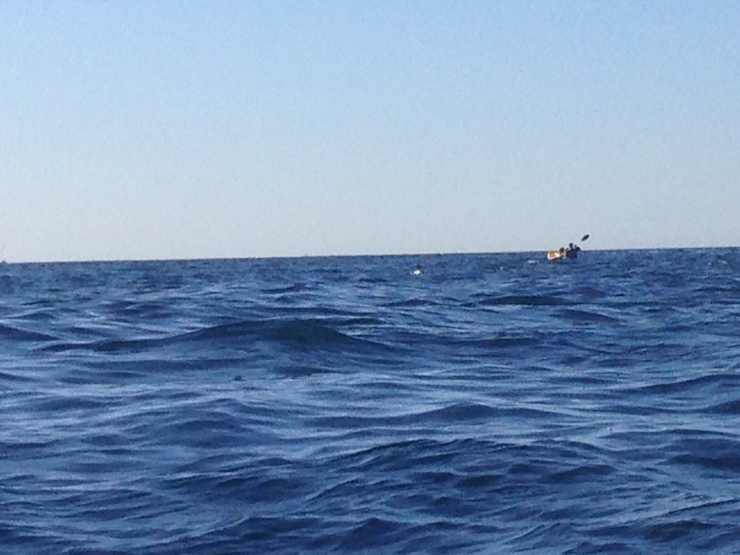 So very often, as parents, our schemes do not pay off. It rained on our camping trip. The hike to the waterfall was a bust. But, finally, here was an adventure that exceeded all of our expectations.

“If I had stayed home, we probably never would have seen them,” said Katie.

I considered arguing with her. Or turning her words into some sort of lesson. Instead, I just nodded my head.

We scanned the horizon, but we never saw the whales again.

It was hard to believe we had actually seen them at all.  In fact, when we looked at home later for photos and videos of the encounter, none of us had caught anything on tape. We had been too excited at first, and then, simply too far away.

Luckily, families are one another’s witnesses. We hold each other’s memories in our hearts.

“You are right, sweetheart,” I said to Katie. “Thanks so much for coming along.”

We turned our boats around, and with the sun setting behind us, paddled back to shore.

(This is what it felt like to be near the whale tale.  Except it was not raining.  It was a different kind of whale.  And also we were much farther away.  This tail is from an upcoming Ron Howard movie, In the Heart of the Sea, which appears to be the opposite of our experience.  But which I will probably see anyway because, you know, whales.  And popcorn.)