The girls and I attended a concert the night before school started.

Before we left, we laid out clothes, turned down beds, and loaded school supplies into knapsacks.

We packed the first day’s lunches and slid them into the fridge.

We agreed to go easy on one another in the morning.

And we headed off.

I felt good about the next 24 hours.

I must have been nuts.

At 7:30 the following morning, no one would get out of bed. My tween begged for more rest, rolled over, and went back to sleep. When our kindergartener finally awoke, she yawned and asked for French toast. When I brought buttered toast instead, she said she hated me, and then refused to put on pants. During her wardrobe malfunction, the dog ate the toast. The child cried.

When we finally dragged the eldest out of bed, there was another school supply meltdown, roughly the fourteenth of the week.

The first time we shopped for school supplies, we could not find a plain green, wide-ruled, non-perforated spiral notebook. So we bought a college-ruled one instead.

The second time we shopped, we still could not find a plain green, wide-ruled, non-perforated spiral notebook. So we bought a green-patterned notebook instead. Just to be safe.

The third time, we learned we had been using the wrong school supply list. We had inadvertently purchased materials required at an identically named elementary school somewhere in Vermont. We had not needed four reams of notebook paper after all. Only one. We did not need red marking pens. Or index cards. Or a pocket thesaurus. Or even a plain green, wide-ruled, non-perforated spiral notebook.

We needed a blue one.

The store was all out of those.

We found a black notebook to add to our previous attempts, and I thought we had a Band-Aid fix. We even joked about how seriously everyone takes school supplies, and how we knew the teacher would be happy if everyone just did the best that they could.

But when confronted with fatigue, first-day jitters, and the weight of these myriad sub-par notebooks, the child crumbled to the floor. There was wailing and gnashing of teeth, and a brief but spirited argument about potato chips.

It was at this precise moment that I remembered my own recent goals regarding ease and wonder, and extending a mellow summertime vibe into the otherwise stressful school year. I began to laugh.

This did not help things.

Both kids were late–LATE!–for the first day of school.

In the 10 1/2 years that I have been in possession of children, we have been late to movies, restaurants, play dates, a hockey game, a cross-country meet, a wedding, the circus, airports, bus stops, every soccer practice that we have ever attended, and church. And, of course, we have been late to school. But never, never on the very first day.

We had to return to the house when the now pants-clad kindergartener realized she had forgotten her backpack. And then we went back again to retrieve her shoes.

There was no parking at either school.

We snapped no photos in front of any Welcome Back! sign.

We delivered no inspirational remarks about the promise of a new year, and said nothing about our hopes and dreams for them.

I forgot to hug my fifth grader, and the kindergartner pushed me away.

We had anticipated that there might be some problems that morning.

One of the only things we are any good at in this family is the bounce back. In an attempt to blot out the horror that was the beginning of our day, after school, we tried again. We set out tomorrow’s clothes, packed lunches, and turned down the beds. But instead of getting in them, we drove to the beach where we took a family back-to-school photo.  In the golden wash of the setting sun, we splashed in the salty surf, breathed in the cool air, and told the kids that tomorrow is another day, full of promise and opportunity, ease and wonder, another chance for their dreams to come true. 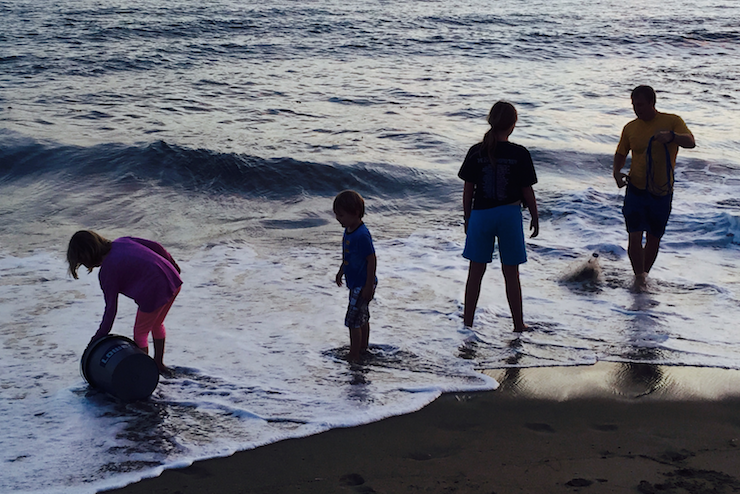 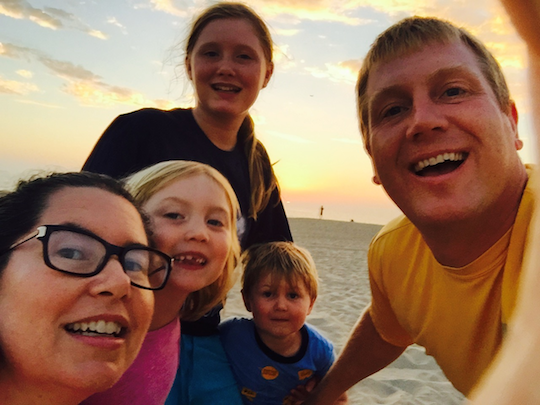