Our dog is dying again. That is not to suggest that he has been dying before. Only that we are preparing to let go of another beloved pet today and it all feels eerily familiar. Shadow has stopped eating. His breathing is labored at the side of my bed. In an hour, we will bring him to the vet, who will likely tell us there is nothing more we can do. We will say good-bye and hold him tight, and the vet will put him down.

Put him down. There should be such a better euphemism for the death of a devoted 16-year-companion. Raise him up. Settle him in. Nudge him aside. Let him go.

He had a good run. We adopted him when we lived in Washington State, and he has scampered all over this great country. He has swum in both the Atlantic and the Pacific and chased tennis balls everywhere from Tampa to Seattle. He accidentally dismembered a squirrel in South Carolina – I swear, that thing just fell out of a tree and into his mouth – and ate two of our chickens when we lived in Ohio. But otherwise, he has been a lazy little dreamer, afraid of fireworks and marching bands, with a little bark and very little bite. Despite our attempts to feed him only dog food, Shadow has eaten every toaster waffle my 3-year-old son has ever held. He has unpacked every lunch box my daughters have ever left on the living room floor, and acquired a taste for cucumbers and granola bars in the process. And, of course, he has found the bacon no matter how far back on the counter I slid it. 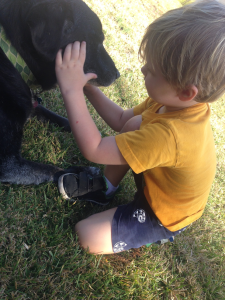 My husband comes from a dog family, and he has buried several pets. Out of all of them, Shadow is the one he has loved the most. He says Shadow is goodness incarnate, the most thoughtful dog he has ever known. In fact, Shadow is cartoonishly affable. He approaches all guests and welcomes all strangers. Did someone call a dog? He has never once frightened off an intruder or defended our home.

He has been a fixture of our household, this loyal pup that I had begun to think would never ever die.  He has few teeth and cannot hear, and he passes gas like it’s his job. But we have loved this stinky, old, arthritic guy for nearly the full duration of our marriage. I can’t help but feel a part of our shared history is dying with him.

Before our kids, Shadow and Hound (who died a few years ago) were our babies. We vacationed with them, road-tripping from one dog-friendly establishment to the next — except for that one motel in Iowa where we got totally busted for sneaking our dogs in the back entrance. We exercised them, bathed them, fed them, and camped with them. And for many years, they were very, very good to us. 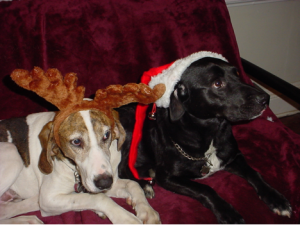 Of course, with the birth of each successive child, our puppies slid further down on our priority list. After schlepping both dogs to an unfenced bungalow in Cape Cod, and chasing them down repeatedly, we started kenneling rather than taking them with us. Jogging Shadow led to walking Shadow, which led to keeping him hooked to a doggy clothesline-type thingie in the back yard. We felt guilty about that, but he always understood.

Over these past few years, Shadow has diminished, has seemed so much less of a dog than he ever was. The children throw balls he does not chase and offer biscuits he cannot chew. But if he became less a dog, it was almost like he became more a person – the friend who greeted me excitedly when I returned home, the nurse who kept the kids warm when they were sick, the brown-eyed companion who sensed joy and sadness alike. 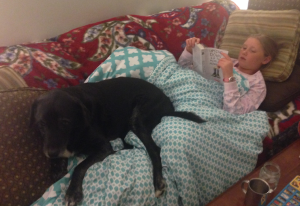 I wonder sometimes why we bother with these animals, when we know it always ends the same. Like bad boyfriends, you give them all your love, and they are destined to leave and break your heart.

The kids want to replace him. They have a list of pets they hope to acquire. Guppies, bunnies, a cat, a turtle, a guinea pig, and a new puppy named “Shadow, Jr.” are all on the list. Though Shadow cannot hear, and does not speak English, I do not like for them to discuss his replacements in front of him. It seems cruel. Also, I’m not sure I have it in me.

Anyone who has an old dog will tell you about buying food. Kibble is exorbitant. Wildly expensive. The only way to make it slightly less-so is to purchase a really big bag. Over the past year, I always hesitated before I lugged it into my cart. “Is he going to live long enough to eat all of this?” Again and again, he did. But Shadow stopped eating yesterday, I am down to the very bottom of the big bag, and the last available helping is still sitting in his bowl. Thoughtful to the very end, Shadow would never want us to waste our money. I can almost hear him saying, No, no. That’s okay. I’m fine. I’ve had a good run. I’m just not hungry anymore.

He has been a bit of a nuisance these past few weeks, always sneaking off to shady patches in the neighbor’s yard and the nearby school. I thought he was being impish, still a pup who likes to wander and explore. I think now he was just looking for someplace to die. He did not ever want to burden us, not with his care-taking, and certainly not with our grief. 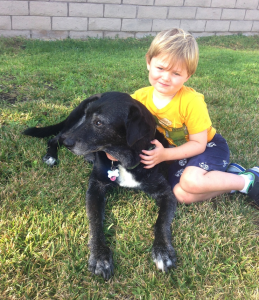 We have loved you Shadow. For almost as long as I can remember. And we are sorry, so very, very sorry, to say good-bye.  If there is a heaven, I have no doubt that you’ll be there, wagging your tail, chasing a tennis ball, and asking all comers, Did someone call a dog?