I tell them about suffrage. About the women and men who fought for all of us to have the right to vote.

I tell them about the Civil Rights Movement. That bodies were beaten and spirits were crushed, and still, the people fought and triumphed.

I tell them America was not ready for a woman President this year. But that will absolutely change.

They will ask, “But why did people vote for a mean man, Mommy?”

And then I will have to defend President-elect Donald Trump. I will say that he probably is not as mean as he sometimes seemed during this campaign. He is a father and a husband. He might not believe women can be equal to men. But he is wrong about this. And, in January, it will be his job to be a President for everyone, not just the people who voted for him. And, boy, isn’t that a hard job? Isn’t that kind of crazy? But every four years, someone has to do that. It’s how America works.

They will ask, “But what can we do now?”

And I will remind them about how we are going to visit great-grandma Mary tonight. We will give her lots of kisses and an ice cream cone. We will go across the hall and invite her neighbor, Betty, to come play cards with us. We will comfort the sick.

When we get home, we will put non-perishables in our backpacks for the fall food drive at school. We will feed the hungry.

And we will finish our Veterans Day pictures paying tribute to those whose sacrifices we sometimes take for granted. We will strengthen this nation.

We will be the changes we want to see.

And we will hug each other. When I smell the innocence of their warm little heads and feel the love in their strong little hearts, I will remember they are the future, and that love – not fear, not anger, not disgust, or even sadness – but love, love always wins.

*And after I put them in bed tonight, I will listen to this song on repeat for awhile. For anyone who needs simultaneous sadness and healing. It is not a Christmas song, but rather a day after Christmas song.  And it is just right.

When the song of the angels is stilled,

When the star in the sky is gone,

When the kings and princes are home,

When the shepherds are back with their flock,

The work of Christmas begins:

To find the lost,

To heal the broken,

To feed the hungry,

To release the prisoner,

To rebuild the nations,

To bring peace among brothers,

To make music from the heart.

The kids and I went canvassing today.

We knocked on doors, distributed leaflets, and encouraged folks to vote early to avoid long lines at the polls. We answered questions about absentee ballots and listened to people’s excitement and concern about the upcoming election. Folks kept their comments appropriate, self-policing, I suppose, since children were present.

Most peeked through their curtains or hesitated before answering. I understood. I seldom open the door to strangers anymore. A midday knock can only mean someone is selling something – insurance policies, security systems, a subscription to a magazine. Sales pitches are so annoyingly awkward. How long do I have to listen to this person before I can politely decline? It is easier to pretend not to be home. In a way, I guess we were selling something – democracy, freedom of speech, America. But maybe because it was a sunny day, or because they saw my kids crunching leaf piles and petting kitty cats, most people came to the door.

I have never participated in a Get Out the Vote Campaign before. I have never been a very political person. But my 11-year-old hopped off the bus a few weeks ago angry about the one-sided opinions tumbling from the mouths of middle school boys.

“What do you want to do about it?” I asked her.

“I think I want a yard sign,” she replied.

I have written about kids and politics. In the past, I believed it was important to keep my vote a secret from my daughter, at least until she was old enough to talk about issues, and not just personalities. I still believe this is true. I think it is both risky and reckless when we indoctrinate our children with our beliefs before they are old enough to really understand and develop their own. Which is why we are canvassing twice this year: once for a Democrat and once for a Republican.

I want my kids to see the common ground, which is, let’s face it, where most of us work, live, and eat. I am supporting the Democrat because of her intelligence, her public service record, and her position on early childhood education. I am supporting the Republican because of his courage, his military record, and his plan for reforming foster care. Especially now, in the most vitriolic and divisive presidential campaign that I have ever seen, I think it is essential to remember my job as a parent—to teach my kids love, to remind them that goodness is everywhere, and that we can learn from anyone, even from those with whom we might disagree.

A few weeks ago, I heard a speech by Seth Moulton, a congressman from Massachusetts. I am not from New England. I do not live in his district. But his words stuck with me. “You should want your representatives in Washington to work for you. You should want us to get things done.” To do that, he insisted, they had to speak to folks on both sides of the aisle. They needed to talk to people with whom they disagreed and seek compromise. The most effective bills, after all, are those with bipartisan support.

The need to talk to people with whom we disagree. . . . I confess I have felt afraid this election season. Two days after my daughter placed her first and only political sign in our front yard, it was stolen. It disappeared from a patch of grass near our front door where she had pressed it into the dirt so proudly.

“Who do you think took it?” she asked.

And I could see her mentally scanning the neighborhood. Was it that mouthy kid on the bus? His older brother? That lady down the street who plays her music too loud when she drives by? I did not like the way the theft made her distrustful of our neighbors. More importantly, I did not like the way this election season had emboldened someone to steal. When did freedom of speech become abhorrent, rather than the one idea upon which all of us can agree?

Election 2016 seems to have done this: made enemies out of neighbors. We are willing to hurt people to get our point across. We think that if we just shout a little louder, the argument will resolve in our favor. But it seems pretty clear that such tactics have merely ensured opposition, ire, and stalemate from representatives who ought to be working for us.

You and I will disagree on some things. That’s a statistical likelihood. I hesitate to put myself in a box, but I tend to be fiscally conservative and socially liberal. No matter who I vote for, he/she will not represent all of my viewpoints. Nor do I expect her to. I learn the issues, listen to the candidates talk, and punch the name on the ballot that seems to jive best with my vision. That’s what voting means. And then I expect that person to do battle for me, to argue and compromise, and ultimately, get things done. If that doesn’t happen, I vote for somebody new next time.

After all, we are in charge of our lawmakers, and not the other way round. If you don’t believe me, grab a handful of flyers with the hours of your local polling place. Take your kids. Bring the dog. And go knock on the doors of your neighbors. Chat about potholes or petunias, or whether the city is doing a good job picking up autumn leaves. Talk to folks with whom you disagree. Our politicians might want us to build walls, but we know – we have always known – that bridges are the future. 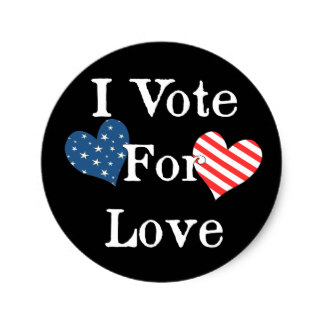 A version of this essay also appeared on the Huffington Post.