My town’s annual 5K was last week. I started at the back of the pack. This was strategic. I prefer to pass slower runners than be overtaken by quicker ones. It’s a mental thing. So I lined up between a grandma in jogging culottes and a teenager drinking a smoothie. Granny, I wasn’t so sure about, but I figured I could outpace Jamba Juice.

The race started with the usual cheers and hoopla, and adrenaline carried me the first half-mile. As weariness set in, humiliation quickly followed. Had I really become the kind of grown-up who could not run a 5K? I shrugged off the doubt and picked human pace cars to keep me moving. For a while, I followed a guy with a dragon tattoo on his calf. I fantasized that this was ninja training and he was my sensei. But Ralph Macchio slowed to answer his cell phone, and as I passed him, I noticed the dragon was actually a hefty mermaid.

Next, I set my sights on a woman with the most beautiful butt I had ever seen — round, strong, jiggle-free. As I matched her pace, I believed that with every stride my own backside was firming up. When she and her running companion slowed to walk, I realized she was about eleven, and running with her dad. 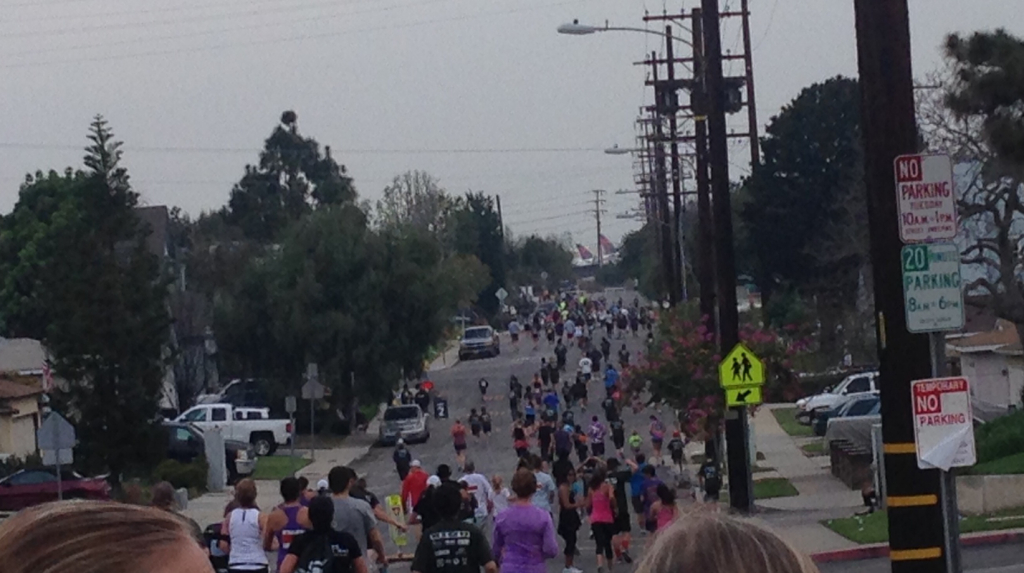 Part of the problem was my soundtrack. At the start of the race, I clicked on an old playlist titled “Exercise” that should have done the trick. Def Leppard kicked things off. I flashed back to high school and channeled my younger, more athletic self. But as I started to fade, so did the playlist. Eminem gave way to the title song from a Barbie movie, Billy Joel’s “Piano Man,” and excerpts from The Sound of Music. Julie Andrews can do no wrong, except when it comes to motivating a tired person to run. I tried to click away from “Do-Re-Mi,” but my fingers were too sweaty.

I used to be a runner, before the kids. I started jogging in college as an attempt to curb the Freshman 15, then kept it up because I loved the way running made me feel. Since the children, it has been harder. Harder to train. Harder to enjoy. Harder to fall into any sort of rhythm. I do other things, but I miss the way I used to slip on my shoes and lope out the door.

The last time I ran a 5K was two children ago. I ran it with my Dad on the 4th of July. That time, I was the pace car for him. But, of course, I had trained, gone out a couple times, practiced the course. Why hadn’t I prepared better for this?

I lurched past a port-o-potty and briefly considered hiding in it. If it had seemed better ventilated, I surely would have. But a woman entered as I got closer, so I kept moving.

At the beginning of the first big hill, I gave up and walked, chiding myself with every step. Why had I just quit? Isn’t that always the way with me? Why do I stop things just when they are getting hard? As I caught my breath, I got even angrier at myself. Why does it matter? You are here. Just do your best. Jogging was easier than listening to arguments in my head, so I picked up the pace again and let gravity send me down the next hill.

One of the things I have always loved about running is how you can settle into its discomfort. The second and third miles were not as tough as the beginning. I found my working breath. It did not sound pretty, but luckily, nobody was running with me, and if I cranked up “The Lonely Goatherd” loud enough, I did not have to listen to my gasping either.

Other folks seemed to have goals that involved time and pacing. I’d like to run 8-minute miles. I want to finish in under 30 minutes. I had fuzzier objectives. They were more about personal dignity than physical achievement. And I dumbed them down as the race progressed.

Just don’t walk too much.

Just be sure to run when you cross the finish line.

Just don’t be last by too much.

By the time I approached the finish line, Billy Joel and I were in a bit of delirium. As I crossed, I fought the temptation to look behind me. I felt fairly certain I was not the only straggler. But I realized that was not the point. I felt lucky. Lucky to have the use of my legs, the health of my lungs, the gift of my mind to swirl with nonsense as I trotted the streets of my town. I stopped thinking about how many people had passed me, and instead gave thanks. Then, I slumped on the grass and drank a smoothie.

I know plenty of friends who have given up. This is the way I will always look. This is the way I will always feel. Parenting, aging, a lot of things can do that to you. But it does not have to be true. I saw folks along this course, ages two to eighty-two. But he is younger. She was in better shape. Hogwash. The only person I raced today was me. And though I very nearly lost, Julie Andrews carried me through. Just start at the very beginning…a very good place to start….