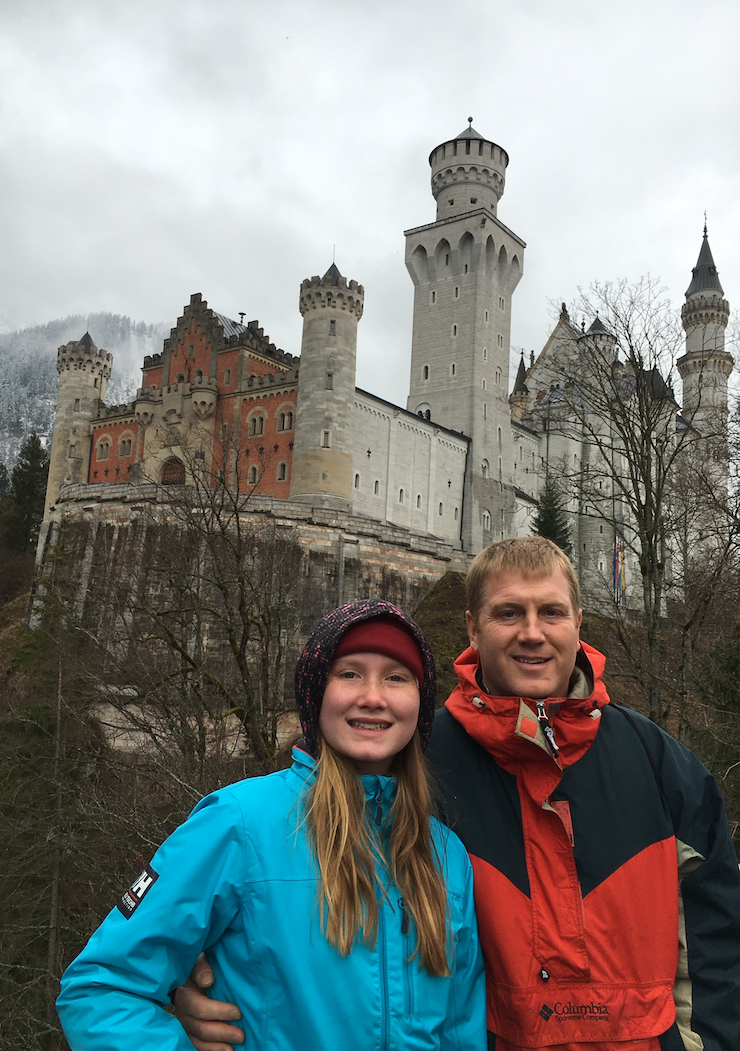 So it was my birthday again yesterday. As usual, no balloons, no party, no fuss. Unless you count the kids arguing over who got to crack the eggs and their shells into my homemade chocolate cake. Just another day trying to love my children the best that I can.

The photograph you see here is not an AFTER shot. This is not the cake as it was after we had enjoyed our delicious little slices. This is the BEFORE. This is the cake we managed to create when the children complained they did not even like cake, or frosting, and so they wanted sprinkles, and Heath bar pieces, M & M’s, marshmallows, and whipped cream. I cut and plated pieces for all three kids to decorate themselves before we even decorated mine. This crumbling, chocolate Pac-Man cake was the finished product. 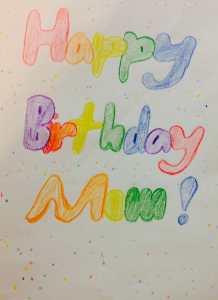 The candles, well, we could only find the six we used back in August for Lizzie’s birthday. They started out as balloons, I think, but after repeated use, they looked like rainbow-colored apples with little half-moon bites taken out of each one. As the kids sang their birthday “Cha-cha-cha,” I could see the candles smiling knowingly at me. “You are almost there,” they implied. “Almost there.”

Because parental birthdays, as many of us have experienced, are a matter of survival. Can we just make it through the day before someone barfs, yells at, or pees on Mom? Any other day, any one of those things happens, and nobody bats an eye. But a birthday? Nobody wants to be the weakest link. And the pressure, Oh the miserable pressure, of trying so hard all day long to be extra special nice to Mommy…it’s exhausting. For everyone.

So as ridiculous as it was to share my cake, my candles, and my day with them, that is the grown-up reality of birthdays with children. I do not blame folks who flee to Vegas or Hawaii or NYC. Or those who cash in their about-to-expire Groupons for an overnight at the Casino or some quaint B & B. But if you are not going to hide from your children on your birthday, you are going to have to share it with them. And they will want a piece of everything. They will take bites out of your cake before you frost it. They will unwrap your presents, blow out your candles, and ask for extra snuggle time when you are trying to drink a freshly brewed cup of birthday tea. This can all seem utterly unreasonable — these demands, these pieces, these needs. But it is actually just love.

And, whether I like it or not, one by one, each of their birthdays long ago replaced my birthday, as the most important day of my life. This one? This old bag? It’s just frosting.

With sprinkles. And marshmallows. 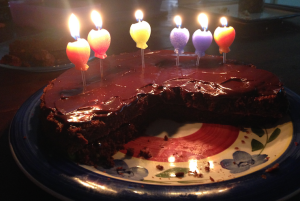 As is her custom, Lizzie-mouse asked for a pie for her birthday. Homemade. Preferably pumpkin. This was not an unusual request. Or even particularly taxing. The kids and I bake pretty frequently. We had a crust in the freezer and a can of pumpkin on the pantry shelf.

Except it has been a bit of a week.

We are moving house. Just across town, not cross-country like the last time around.  But somehow the close proximity of our new home to our old flummoxed me utterly. When the gentlemen arrived with the second truck — after the first one rather cartoonishly rolled away — we had only packed three-and-a-half boxes. We’ve been busy summering — pool dates, beach trips, ice cream. I guess I figured that when the time came for the actual move, we would just “throw everything in laundry baskets.” Except I have only four laundry baskets. Five if you count the suitcase in the corner not yet unpacked from our trip to Cleveland five weeks ago. And as it turned out, I was not able to fit the entirety of our household possessions in these five containers. Thus, what followed was the most slip-shod, haphazard relocation project I have ever participated in. It topped the great dorm room debacle of ’94, when my roommate Meg was left to contend with the crusty macaroni and cheese dishes, the myriad holes in the walls, and the rotten pumpkin on the balcony. It topped the Ohio move when my friend Debbie, upon seeing the extent of my packing fiasco, voluntarily loaded her minivan with my trash bags and recycling. And it surpassed the chaotic 2002 move from Washington State when the cleaning crew we hired never showed up, and my best friend Jen, who just came to say good-bye and drop off some sandwiches, ended up washing our dog-slobber encrusted walls and windows with my husband’s old t-shirt and a bar of soap.

Last week’s move was like all of those moves combined.  Except without the assistance of all of those friends.  Without pals, packing paper, and you know, planning, we ended up rolling glassware in sweatpants and interspersing muffin tins with socks. I used the kids’ underwear to cushion coffee mugs. Trashcans were moved with the trash still inside. We had four days to finish this godforsaken move – eons in moving time. But the first day was the killer truck incident and the last day was Lizzie’s birthday, and all that happened in-between was a blur.

So long story short: I forgot to make the pie. I thawed the crust. Unearthed the pie pan in a laundry basket full of sweaters. But then never gave it another thought. It was as though I subconsciously believed those two preparatory actions would finish the job on their own.

At 9:30 on the night of her birthday, Lizzie said, “Mom, aren’t we going to sing to me?” Candles will not stand up in tomato soup (her birthday dinner), and they look sad in an empty pan, so I scurried around the kitchen looking for something else to light. That’s when I saw the banana. I crossed my fingers, stuck in the candles, and turned off the lights. We sang. Lizzie made her wish. And she blew out her banana.

For a few moments, I felt like a jerk. Who fails to make a kid her special dessert on her birthday? It’s like the only day a parent is required to produce a baked good. But when I looked at Lizzie’s face, as she laughed at her candles and peeled her banana ‘cake,’ I knew that this kid was okay. In fact, she was more than okay. She was delighted.

Kids are more resilient than we think. They fool us into believing they want comfort – the same chicken nuggets when we go to a restaurant, that particular stuffed animal when we tuck them good night. And to some extent, my kids are reassured by such routines. But they also love to be silly. And I think they love it even more when Mom and Dad are the source of the zaniness. When I brought out her flaming banana, I feared Lizzie might cry or pout because it was not, in fact, anything even resembling a pie. Instead, she smiled and laughed. She blew out her candles and even asked to make an extra wish. 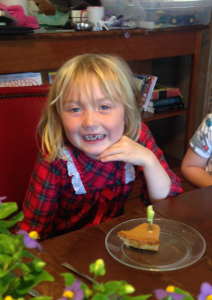 If the wish was for pie, it worked.  We ate one for breakfast the following morning. 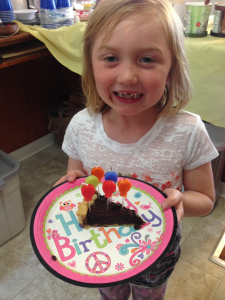 And another one the next day just to be safe.

Happy Birthday, Lizzie.  May the bananas always be with you.

Another birthday has come and gone.

My children, God bless them, tried so hard.

All day, they squabbled incessantly trying to celebrate me. “No, I want to sit next to Mom!” “But it’s MY turn!” They shoved one another off the couch, and argued over who got to unwrap the presents they offered. The sunscreen. The stapler. The pancake mix.

There were the usual culinary efforts. Lizzie made me a box of macaroni and cheese, her favorite, and then she and Henry ate it themselves.

Katie measured the baking soda for the cupcakes and learned that “not all spoons are teaspoons.” The density of the puck-like cakes notwithstanding, this really was one of her better birthday confections. I much preferred it to the gluten-free pineapple upside-down porridge of a year ago. 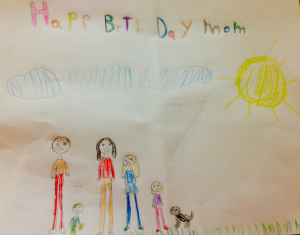 This year, the children even gave me some alone time to write, journeying with their father to the 99 Cents Only Store. They returned with provisions for a new activity on the birthday agenda – Spa Time.

The basic rules are these:

1. Plunk Mom in the bathtub with her feet in a cold soak.

2. Slather her in cheap skin products.

I am a person who eschews bottled fragrances. My children know this. I don’t favor perfumes, body sprays, or scented roll-on deodorants. Hand lotion makes me sweat. And I have never understood aromatherapy, unless is the actual real-life smell of cinnamon rolls or chocolate chip cookies. However, for tonight, my daughters had forgotten all that. And for tonight, I sucked it up. After all, it was my birthday present.

A sampling of the evening’s offerings included:

*And a lavender-scented eye mask.

My girls took turns applying all of it with a wash cloth that smelled like a moldy sock.

While Katie played aesthetician, Lizzie offered me a backrub she called the “poke and scratch.”

I hated every minute of it.

And I loved every minute of it.

Because even though my hands still itch from the horror the kids massaged into my palms, and my toenails are now painted hooker hot pink, for forty-five minutes, my daughters tried to pamper me, to say “We Love You, Mommy!” in the most indulgent way they could imagine. Somewhere beneath the sodium laureth sulfate and yellow number 5 was the admission that Mom’s days are stressful because of us. Tonight, because it was my birthday, they sought to give me ease.

It was a misery. And it was wonderful.